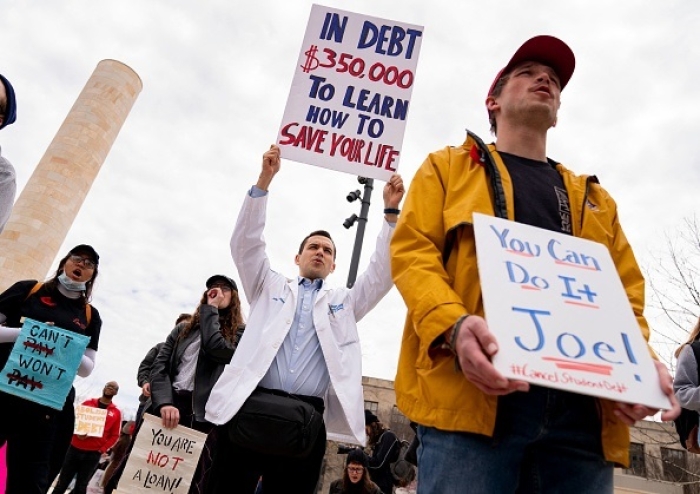 Student debtors rally outside the Education Department in Washington on April 4, 2022. (Photo by STEFANI REYNOLDS/AFP via Getty Images)

But the most recent pause is set to expire at the end of August, when Biden faces a decision: cancel student loan repayments, pause them again, or allow the resumption of payments.

On Tuesday, White House spokeswoman Karine Jean-Pierre responded to a reporter who told her that many borrowers feel like they've been "left in limbo, making it difficult to plan financially."

"I'll say this, and we have been very clear on this," Jean-Pierre said. "Like, the President understands how student loans can affect a family and how the pressure of that can really be a lot and put a lot of weight on a family's economic situation.

"So we understand that. He is going to make his decision on this, and when he has something to say, we will share that."

In response to a second reporter who asked a similar question, Jean-Pierre said there's been no decision yet on whether to pause or cancel:

"So, when it comes to the -- to the pause, I know there's a pause and the cancellation, we haven't made a decision yet. So, I'm just going to go to -- to go to the pause first.

“The Department of Education will communicate directly with borrowers about the end of the payment pause when a decision is made. So, again, no decisions have been made.

"So, no decisions have been made on that yesterday. And the president has made clear it will -- he'll have something before August 31st."

Reps. Pramila Jayapal (D-Wash.) and Mondaire Jones (D-N.Y.) are among the congressional leftists who repeatedly issue tweets saying, "Today would be a great day to cancel student loan debt."

Here's a sample of recent tweets related to the "cancel student debt" hashtag: