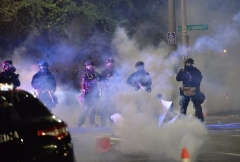 Law enforcement officers stand in a cloud of tear gas in Portland, Oregon on July 26, 2020, as sometimes violent protests continue across the United States. (Photo by ANKUR DHOLAKIA/AFP via Getty Images)

It "tells you all you need to know about the liberal agenda that they are going to try and advance on the American people," Pence said.

And the fact that Joe Biden in his speech last night never mentioned China was truly remarkable. And it's also remarkable, Brian, that the Democrat nominee for president of the United States never mentioned the violence that is claiming lives and destroying property in major cities across this country.

And I’m going to tell you, this president, this administration is going to stand with the men and women of law enforcement, with programs like operation legend where we have seen the arrest of more than 1,000 criminals in cities across the country already. We're going to bring law and order to our cities. You're going to hear about that next week.

Pence noted that when President Trump took office, half of the U.S. trade deficit was with China, whose military was growing.

"Their aggression was growing. We continued to see China flexing its muscles throughout the Asia Pacific. President Trump announced that the era of economic surrender was over. We stood strong against China. Imposed tariffs. And as we rebuilt our military, reaffirmed our commitment to freedom of navigation. You know, China's getting the message that America is going to continue to stand strong."

'Character is on the ballot'

You know, I’ve been traveling all across this country, supporting law enforcement. Talking about the growth in this economy and this president's vision for bringing the economy not only all the way back but building even a greater economy than the world's ever known over the next four years. And the contrast with Joe Biden and (what) the Democrats are offering are astonishing.

Think about that, in the middle of a global pandemic, Joe Biden's first act will be to raise taxes on the American people by $4 trillion. To advance a $2 trillion-version of the green new deal. To stifle American energy and, take us back to the kind of economic surrender to China and other countries that literally saw more than 60,000 factories close over the last 20 years in this country.

I mean, that's the agenda we're going to take and it's also an agenda of law and order and law enforcement support. I mean, this president believes that we don't have to make a choice between supporting law enforcement and supporting our African-American families and our cities and other minority families in our cities. We have done both from the beginning of this administration. We're going to continue to do both.

But the Democrats are offering a vision for this country that would crush our economy and promote the kind of policies that will resort in more violent in our streets. And I think the American people know it.

In a similar vein, President Donald Trump told a campaign rally in Pennsylvania on Thursday, "If you want a vision of your life under Biden presidency, think of the smoldering ruins in Minneapolis, the violent anarchy of Portland, the bloodstained sidewalks of Chicago. And imagine the mayhem coming to your town and every single town in America. You're not going to have law and order."