VP Harris in Highland Park: 'This Experience Is Something That Is Going to Linger in Terms of the Trauma' 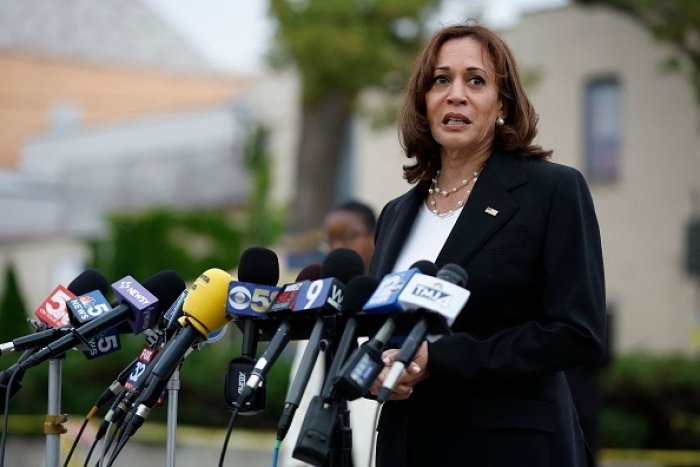 Vice President Kamala Harris speaks during a surprise visit to the site of a shooting which left seven dead in Highland Park, Illinois, on July 5, 2022. (Photo by KAMIL KRZACZYNSKI/AFP via Getty Images)

(CNSNews.com) - "I bring you condolences from President Joe Biden and from our country," Vice President Kamala Harris told the devastated people of Highland Park, Illinois. She called the mass shooting "absolutely senseless," and urged survivors to "hold each other tight as a community."

Seven people were shot to death on Monday and many more were injured when a troubled young man fired into a July 4th parade from a rooftop.

"And this person will be brought to justice, but it’s not going to undo what happened," Harris said:

"And we — we’re here for you, and we stand with you.  And of course, as we always say — because it is true — our prayers are with you.

"There’s a lot of healing that’s going to have to happen that is both physical and emotional. There is no question that this experience is something that is going to linger in terms of the trauma.  And so, I’d like to urge all the families and all the individuals to do seek the support that you so rightly deserve.

"And — and we’ll deal with what we need to deal with in terms of also, as we move forward, all agreeing that we’ve got to be smarter as a country in terms of who has access to what and, in particular, assault weapons.  And we got to take this stuff seriously, as seriously as you are — because you have been forced to have to take it seriously.

"The whole nation should understand and have a level of empathy to understand that this can happen anywhere, in any peace-loving community.  And we should stand together and speak out about why it’s got to stop. Thank you."

Harris had already planned to be in Chicago on Tuesday to address the National Education Association. Highland Park is a Chicago suburb.