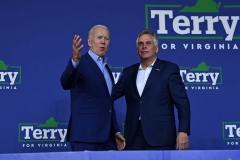 Among other things, she said, they want school choice, not critical race theory, which reportedly made an appearance in Virginia schools in 2015, during McAuliffe's first term as governor.

"This is not a white/black thing. Our children aren't learning," Sears said, noting dismal reading and math scores, especially for black students.

"I have knocked on doors, public housing also. You know what those mothers and fathers tell me? They want their children to have a choice on where to go to school. Because what's happening now is not working.

"Our children need a hope and a future. They need critical reading theory; critical writing theory; critical science theory. Because here's the thing, Steve...We are not on this planet by ourselves. We've got China to think about. Economists are projecting that China will be the number one superpower by the year 2030. Their children go to school pre-kindergarten, 2 years old, 3 years old. What are we doing? We're destroying ourselves."

Sears also talked about the in-church campaigning for McAuliffe by Democrat activist Stacy Abrams and Vice President Kamala Harris, who taped a vote-for-McAuliffe video that played in hundreds of black churches over the weekend.

"This is the constant okey-doke, is what we call it," Sears said. "You know, you show up at election time. We don't ever see you again until another four years. So you can set your watch by them."

Sears recalled that Hillary Clinton also turned to black churches in her unsuccessful quest for president:

I remember when Hillary Clinton was running for president, and she came out to a black church and started using some tired vernacular supposedly mimicking us, 'I don't feel no ways tired.' And I'm thinking, is this how you speak to us as black people? Have you lost your mind? Are you crazy? But see, this is what they do.

And the fact that they are coming to our churches, they don't go to the white churches and do this. They come to the black churches and do this. And you wonder, the purpose of church is to worship God. Is He listening to what you're saying? Are you giving the other side a fair shake? Are you inviting both candidates?

McAuliffe is taking every opportunity to tie Youngkin to Trump, who has not campaigned for Youngkin, although Trump did endorse him.