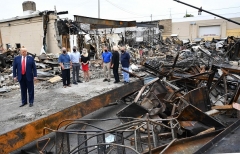 (CNSNews.com) -- CNN contributor and social justice activist Van Jones says the "unrest" in American cities is working to President Trump's advantage, "because we're not talking about the economic devastation that people are experiencing or the virus, really."

His advice: Democrats and progressives, including Joe Biden, should call for an end to nighttime protests:

"We have two social movements. Both have edges of violence to them, one on the left, one on the right," Jones told CNN's "New Day" on Wednesday.

The question is, how are Democrats and progressives going to deal with the edges of violence in our own movement? I think that Joe Biden can actually get to move his own movement in a better direction. We need a national moratorium on these nighttime marches.

That would separate the responsible, productive demonstrations that have united the whole world from some of these other demonstrations that are just not as useful. There are things that Joe Biden and other progressives can do. They can begin to push down on the violence in our movement and then turn it back toward the people who are actually suffering.

Jones noted that the number of COVID deaths in the United States is approaching 200,000:

“There should be a national week of mourning where we bring forward all these voices and all these stories of the people we have lost,” he said:

I think also, people are tired of the lockdown. And when you only see us say we're going to follow the science, people are starting to get afraid that Biden's going to keep us locked down. The chink in Trump's armor that has not been exploited is the need for tests for all. It is possible to have a national program for testing for everybody on a regular basis, and that would let you open the economy and the schools safely.

Donald Trump doesn't like the tests. Let's mourn the people who are suffering. Let's focus on the businesses that have been destroyed by his mishandling of the economy. And let's also have a real solution, tests for all, which would open things up.