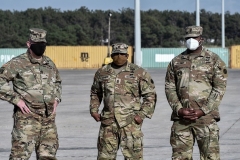 U.S. Army officers in the port of Alexandroupoli, Northern Greece, on December 3, 2021. (Photo by SAKIS MITROLIDIS/AFP via Getty Images)

"Instruction 1325.06," as it is designated, takes effect immediately.

As Secretary Austin has emphasized, the Department is focused on prohibited activity, no on a particular ideology thought or political orientation. The Department has always maintained a distinction between thoughts and actions.

The new definition (of "extremism") preserves a service member's right of expression to the extent possible while also balancing the need for good order and discipline to affect military combat and unit readiness. These new updates provide increased clarity for service members and commanders on what qualifies as prohibited extremist activities.

Section 8 of Instruction 1325.06 identifies harms to the military from extremist activities, discusses the authority and responsibility of the commander to maintain good order and discipline, and lists prohibited "extremist activities" as well as what it means for service members to "actively participate" in those activities.

Extremist activities are defined as advocating or engaging in:

-- Unlawful force, unlawful violence or other illegal means to deprive individuals of their constitutional or lawful rights.

-- Unlawful force or violence to achieve goals that are political, religious, discriminatory, or ideological in nature.

-- Supporting terrorism in the United States or abroad.

-- Encouraging military, civilian or contractor personnel within the DoD or Coast Guard to disobey lawful orders or violate U.S. laws;

"The term 'active participation' means the following, except where such activity is within the scope of an official duty (e.g., intelligence or law enforcement operations)":

-- Advocating or engaging in the use or threat of unlawful force or violence in support of extremist activities.

-- Advocating for, or providing material support or resources to, individuals or organizations that promote or threaten the unlawful use of force or violence in support of extremist activities, with the intent to support such promotion or threats.

-- Knowingly communicating information that compromises the operational security of any military organization or mission, in support of extremist activities.

-- Recruiting or training others to engage in extremist activities.

-- Fundraising for, or making personal contributions through donations of any kind (including but not limited to the solicitation, collection, or payment of fees or dues) to a group or organization that engages in extremist activities, with the intent to support those activities.

-- Creating, organizing, or taking a leadership role in a group or organization that engages in or advocates for extremist activities, with knowledge of those activities.

-- Actively demonstrating or rallying in support of extremist activities (but not merely observing such demonstrations or rallies as a spectator).

-- Distributing literature or other promotional materials, on or off a military installation, the primary purpose and content of which is to advocate for extremist activities, with the intent to promote that advocacy.

clothing, tattoos, and bumper stickers, whether on or off a military installation.

-- Knowingly taking any other action in support of, or engaging in, extremist activities, when such conduct is prejudicial to good order and discipline or is service-discrediting.

A reporter asked Kirby why the Defense Department didn't include a list of groups that service members should avoid. Kirby said groups "can disband and reform into something else," so any list of prohibited groups would be outdated the moment it was published.

He also noted that "there is no federal list of extremist groups. And so, we didn't think it was appropriate for the Department of Defense to establish one."

As for "liking" something on social media, Kirby said "liking is, of course, advocating, right? And advocating for extremist groups that...advocate in the overthrow of the Constitution, the overthrow of the government, terrorist activities -- liking is an advocation, and that's laid out clear in the instruction.

"But the other thing that's laid out in the instruction is the responsibilities and the authorities of commanders here. And so, it's very -- it's going to be very case specific, and it will be up to a -- the chain -- an individual's chain of command and his or her senior leadership in the unit to have that discussion, the determination whether this was a very deliberate act of active participation in extremist activities or whether it was maybe a mistake.

"And, you know, I don't think it would be helpful to get into hypotheticals at this point in time, but that's one of the reasons -- your question is exactly one of the reasons why one key component of this instruction is a more clear explanation of what commanders' authorities and responsibilities are and really delegating down to them because they know their units and they know their people better than anybody. Delegating down to them to help make that determination."

Kirby said no one will be monitoring the social media of the troops. "There's no ability for the Department of Defense to monitor the personal social media content of every member of the armed forces. And even if there was, that's not the intent here.

"What we're talking about is a case where, for instance, it came to light that an individual on social media openly advocated, forwarded, encouraged the dissemination of prohibited extremist material. That would have to come to light through various streams of reporting. It wouldn't be something that the command or the department's going to be actively fishing for."

The reporter asked Kirby: "So if a member of the U.S. Military likes a post that says Joe Biden is not the president, is that considered extremist behavior and punishable?"

Kirby refused to "get into specific hypotheticals...I just won't do that...The instruction's very clear about what comprises extremist activity and what comprises active participation in it. And we certainly have full confidence in our commanders' ability when something's reported to them to treat it appropriately and to -- and to look into it in the manner that they see fit," Kirby added.

Kirby said the military will provide a "training and education program that includes very specifically the guidelines for social medial, what's permissible and what's not with respect to extremist prohibited activities."

Kirby also made it clear that the new instruction has nothing to do with who a service member votes for or for their personal political views. "We encourage the men and women of the military to vote," he said. "This isn't about political leanings or partisan inclinations. It's about activity. It's about prohibited extremist activity and active participation in that activity."