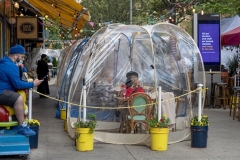 A woman dines in a "social distancing bubble" in Phase 4 of re-opening in New York City on September 28, 2020. (Photo by Alexi Rosenfeld/Getty Images)

(CNSNews.com) - As more death certificates are tabulated by the CDC's National Center for Health Statistics, it now appears that the COVID death toll ticked up, not down, in the week that ended on August 1, by the very smallest of margins.

It is important to note that both of those numbers are likely to change again in the weeks ahead because they are based on a continuous and lagging flow of mortality data that do not include all of the deaths that occurred during a given time period, especially for the more recent time periods.

According to the Centers for Disease Control and Prevention, "Death counts for earlier weeks are continually revised and may increase or decrease as new and updated death certificate data are received from the states." That explains how a slight decrease for the first week in August has now turned into a slight increase, shifting the second peak of COVID deaths by one week.

As the chart below shows, the first COVID death in the United States happened in the week ending Feb. 8.

Then followed a ten-week decline to 3,760 COVID deaths at the end of June (week ending June 27).

But after the July 4th holiday week, COVID-involved deaths started rising again and did so for at least 4 weeks, through August 1, according to the latest CDC update.

The CDC says based on official death certificate information, a total of 191,451 people have now died in this country from COVID-19 since February 1. In that same time period, NCHS counts 2,061,145 deaths from all causes in this country.