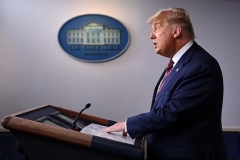 President Trump speaks at a news conference on November 5, 2020. (Photo by BRENDAN SMIALOWSKI/AFP via Getty Images)

(CNSNews.com) - As of early Friday morning, President Trump had issued 16 tweets in 24 hours, and seven of them were labeled as "misleading" and hidden by Twitter.

Around 2 a.m., Trump reacted to the censorship, writing: "Twitter is out of control, made possible through the government gift of Section 230!"

Several of the suppressed tweets were video clips of President Trump's news conference on Thursday evening, where he discussed the problems he sees with the ballot counting and alleged fraud.

President Trump reacts to Twitter hiding his tweets on Nov. 5, 2020.

Others read as follows:

-- I easily WIN the Presidency of the United States with LEGAL VOTES CAST. The OBSERVERS were not allowed, in any way, shape, or form, to do their job and therefore, votes accepted during this period must be determined to be ILLEGAL VOTES. U.S. Supreme Court should decide!

-- All of the recent Biden claimed States will be legally challenged by us for Voter Fraud and State Election Fraud. Plenty of proof - just check out the Media. WE WILL WIN! America First!

-- ANY VOTE THAT CAME IN AFTER ELECTION DAY WILL NOT BE COUNTED! (Twitter responded to this tweet, saying, “Some votes may still need to be counted.”)

The warning label by Twitters reads: "Some or all of the content shared in this Tweet is disputed and might be misleading about an election or other civic process. Learn more"

The "learn more" link takes you to Twitter's lengthy "Civic integrity policy," which begins this way:

You may not use Twitter’s services for the purpose of manipulating or interfering in elections or other civic processes. This includes posting or sharing content that may suppress participation or mislead people about when, where, or how to participate in a civic process. In addition, we may label and reduce the visibility of Tweets containing false or misleading information about civic processes in order to provide additional context.

People who want to read what Trump tweeted -- and what Twitter finds so offensive -- can click on the "View" button.

It also protects them from liability arising from "any action voluntarily taken in good faith to restrict access to or availability of material that the provider or user considers to be obscene, lewd, lascivious, filthy, excessively violent, harassing, or otherwise objectionable, whether or not such material is constitutionally protected..."

Also See:
Twitter CEO Explains Why Trump's Tweets Are Labeled, While Communists & Dictators Get a Pass