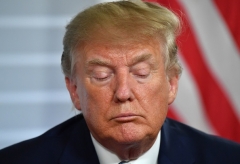 (CNSNews.com) - "How can we possibly have a fair trial?" Donald Trump's attorney David Schoen asked on Monday night. Schoen indicated that he may call "many of the senators as witnesses because of the awful bias and prejudgment they've shown."

(Sen. Lindsey Graham has warned against calling witnesses, something that would prolong the trial for "weeks or months," which "would be bad for the country," he said on Monday. More on Graham's remarks below.)

Schoen argued that the second impeachment of Donald Trump is "the most ill-advised legislative action that I've seen in my lifetime."

"There are two points about this," Schoen told Fox News's Sean Hannity:

I would say you also should be able to call...many of the senators as witnesses because of the awful bias and prejudgment they've shown.

Can you imagine any...trial in which the judge and jury has already announced publicly that the defendant must be convicted in this case? And, in fact, Senator Leahy demanded that Senator McConnell vote for conviction also.

You know, both sides, everyone, it's clear to them, Donald Trump undercut democracy. How can we possibly have a fair trial? Chuck Schumer, Senator Schumer, promised a fair and full trial. You can't when you know that the juror and the judge are biased going in.

The second thing is, does this country really need to see videotapes? We know now, apparently, that Mr. Swalwell and the other managers intend to show videotapes of the riots -- people coming in, people being hurt, police officers talking -- why does the country need that now? We would stipulate that there was a riot that went on that day. It was a tragedy.

President Trump has condemned violence at all times. Read the words of his speech. It calls for peacefulness. This has nothing to do with President Trump, and the country doesn't need to just watch videos of riots and unrest. We need to heal now. We need to move forward. Joe Biden has a platform -- let's move forward with it, if that's the case.

Schoen said the trial will tear the country apart, and he said President Joe Biden "missed a great opportunity to be a statesman" by demanding that his party drop the impeachment effort.

"This is the political weaponization of the impeachment process,” Schoen said.

There was a rush to judgment. Listen, when President Trump became president, on the day he was elected, there were calls for his impeachment already. This is the weapon they have tried to use against him.

But now we know also that the agenda, Nancy Pelosi and others, is simply to bar President Trump from ever running for president again. And that's about as undemocratic as you can get. Can you imagine the slap in the face that is to the 75 million or more voters who voted for Donald Trump and other supporters?

Even people who didn't vote for him support an open political process. Fair-minded people don't support using the impeachment process to then try to bar someone from running for office again. But you're right also. There are many constitutional arguments against this. We don't use our political preferences to tear down the Constitution.

The House of Representatives voted 232-197 to impeach Trump for "incitement of insurrection" in connection with the attack on the U.S. Capitol on January 6. The Senate trial is scheduled to begin next week.

Sen.  Lindsey Graham (R-S.C.) told Fox News on Monday the evidence shows people came to Washington for a "pre-planned" attack before Trump addressed his supporters at a rally on the Ellipse:

So I'm confident of the outcome here that we're going to have more than 45 votes for a motion to dismiss on the idea that this is unconstitutional impeachment pursuing somebody out of office. I think the acquittal number will be pretty close. It will be in the high 40s.

But the question is… how does this trial end? If the House managers want to use this as a political commercial against Donald Trump and the Republicans, and they want to call witnesses now they didn't call during the impeachment process in the House, this thing could go for weeks or months, and that would be bad for the country.

So, to my Democratic colleagues, if you vote to call one witness -- none were called in the House -- get ready for a long trial.

Graham said if the Democrats do call witnesses, "we'll want the FBI to come in and tell us about how people actually pre-planned these attacks and what happened with the security footprint at the Capitol.

“You open up Pandora's Box if you call one witness. I hope we don't call any and we vote and get this trial over next week when it starts.”