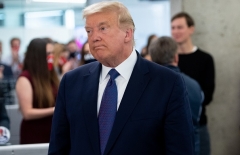 (CNSNews.com) - President Donald Trump begins this day after the election with the race tightening and still not settled. And he has questions:

"Last night I was leading, often solidly, in many key States, in almost all instances Democrat run & controlled," Trump tweeted. "Then, one by one, they started to magically disappear as surprise ballot dumps were counted. VERY STRANGE, and the 'pollsters' got it completely & historically wrong!"

That follows a post-midnight tweet, in which Trump wrote: "We are up BIG, but they are trying to STEAL the Election. We will never let them do it. Votes cannot be cast after the Polls are closed!" (Twitter slapped a "misleading" warning label on that tweet.)

A number of states, including Pennsylvania and North Carolina, are taking extra time -- extra days, in fact -- to count mail-in and absentee ballots that are supposed to be postmarked by November 3.

"WHAT IS THIS ALL ABOUT?" Trump asked in response to a tweet saying that a ballot update in Michigan "gives Biden 100% of new votes — 128k+"

Trump tweeted: "How come every time they count Mail-In ballot dumps they are so devastating in their percentage and power of destruction?"