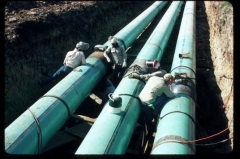 In this file photo, welders work on a Strategic Petroleum Reserve pipeline in Louisiana. Begun under President Ford to reduce the threat of oil embargoes, the SPR crude oil is stored in huge underground salt caverns along the Gulf of Mexico. (Photo by Robert Nickelsberg/Liaison)

(CNSNews.com) - As gasoline and heating oil prices continue to rise, the White House on Tuesday announced that President Joe Biden will release 50 million barrels of oil from the 714-million-barrel Strategic Petroleum Reserve, which may lower fuel prices just a little for a short time.

Jared Bernstein, a member of the White House Council of Economic Advisers, told CNN on Tuesday, "This is Joe Biden doing what he said he would do, using every tool at his disposal to help the American consumer get through this period where production isn't quite up to demand."

But former President Donald Trump, who returned the Petroleum Reserve to full capacity, issued a statement condemning the move:

"For decades our Country’s very important Strategic Oil Reserves were low or virtually empty in that no President wanted to pay the price of filling them up. I filled them up three years ago, right to the top, when oil prices were very low," Trump said:

Those reserves are meant to be used for serious emergencies, like war, and nothing else. Now I understand that Joe Biden will be announcing an “attack” on the newly brimming Strategic Oil Reserves so that he could get the close to record-setting high oil prices artificially lowered.

We were energy independent one year ago, now we are at the mercy of OPEC, gasoline is selling for $7 in parts of California, going up all over the Country, and they are taking oil from our Strategic Reserves. Is this any way to run a Country?

He said the 50 million barrels should be "useful to help middle-class consumers get through this period of elevated prices."

"So how much relief will this bring and how long will it last?" host Brianna Keilar asked Bernstein:

"We believe that it will last until the oil market kind of comes down on its own. And so, as I mentioned, we're already seeing some price effects," Bernstein said.

"That's because this is a coordinated effort with numerous other countries, Japan, South Korea, China, India, the UK. So it is a pretty powerful punch.

"And once that gets out there, we start to see deliveries of oil, probably mid-December, but, again, we already have oil markets moving on this news, and so we believe that's going to show up at the pumps, helping middle-class, low-income consumers as they get through this period."

How much will drivers save at the filling station?

"I don't think I can give you exactly the number of cents that we should expect the price of a gallon of gas to come down," Bernstein said.

"What I can tell you is that oil is already down 10 percent since this discussion began. That will show up at the pump, and it will show up as not just gas prices stop moving up, as they have done, about a dollar up over the past year, but they'll start coming down as well."

Bernstein, pressed on how long the relief will last, said, "certainly more than two weeks." He said we should think of this as "a bridge between the current dynamics, where simply the production, the supply of oil, isn't enough to meet the demand that’s a result of this really quite strong American economic recovery."

You know, because of the rescue plan, the president helping get shots in arms and checks in pockets, we know we’ve pulled this recovery forward very significantly. We have unemployment down below 5 percent; 600,000 jobs per month; we have rising wages; we have over 10 million job openings, and this is putting some pressure on the demand side of the economy, well before many forecasters thought that would be the case.”

And the supply of energy just hasn't kept up with it. So when president Biden said I'm going to use every tool I have to fix that mismatch between excess demand and supply, this is part of that, and it’s going to help bridge us over to a period where prices should normalize on their own.

Bernstein said he doesn't know if the White House is considering a ban on U.S. oil exports at this time of high domestic demand:

"I think when it comes to oil, you're generally really talking about a global market. So one country's actions like that may not affect the global price.

“I think, when you get this many countries tapping their reserves, then you’re going to see, as I mentioned, I think a bridge price coming down until the global market price normalizes and the supply/demand mismatch eventually fades.”

Macchiarola agreed that "demand has returned as the economy comes back and is outpacing supply."

But, he added: "Further impacting the imbalance is the continued decision from the administration to restrict access to America’s energy supply and cancel important infrastructure projects. Rather than launching investigations on markets that are regulated and closely monitored on a daily basis or pleading with OPEC to increase supply, we should be encouraging the safe and responsible development of American-made oil and natural gas.”