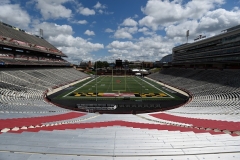 (CNSNews.com) - "Play College Football!" President Trump tweeted Monday afternoon, as the major conferences near a decision on whether to cancel the season because of the coronavirus pandemic.

There are good reasons to play, said Dr. Scott Atlas, a physician and one of the president's advisers.

"My thought is here, at this point, there is really such fear in the community, and unfortunately it's been propagated by people who are doing some very sloppy thinking and really sensationalistic media reporting.

“So I think we have to get a grip here, look at the science, understand who we're talking about here, there's not a lot of obese, diabetic 78-year-olds playing football."

Atlas told Fox New's Martha MacCallum on Monday it's safer for college athletes to be playing than to be at home.

[T]he environment of college sports and athletes is a very, very sophisticated environment. They have health care, they are very controlled, there's accountability, they couldn't get a better and safer environment, no matter what environment you're from...

But there's something else here, and this is, again, based on logic and common sense. We're talking about people who are physical specimens who are really super-young people. Young people that age without a comorbidity have virtually zero risk from this. We have to, again, become rational here. The risk for people that age is less than seasonal influenza.

I mean, you have to look at the data, and again, you can't say it's all about the science and then act contrary to the science. So this is a perfect situation here, we've got young people that are very healthy. Of course, there has to be accommodation for those with comorbidities, and I'm sure there are some athletes that are diabetic or have other comorbidities. I'm sure there are some coaches that do, and we know how to safely take care of those people.

And of course if people are afraid, or if they have comorbidities and are afraid, I'm sure it's okay that they can opt out. But there's no reason to shut down out of fear here.

Likewise, University of Alabama Coach Nick Saban told ESPN on Monday: "I know I'll be criticized no matter what I say, that I don't care about player safety. Look, players are a lot safer with us than they are running around at home. We have around a 2 percent positive ratio on our team since the Fourth of July. It's a lot higher than that in society. We act like these guys can't get this unless they play football. They can get it anywhere, whether they're in a bar or just hanging out."

Vice President Mike Pence tweeted on Monday, "America needs College Football! It’s important for student-athletes, schools, and our Nation. These Great athletes have worked their whole lives for the opportunity compete on the college gridiron and they deserve the chance to safely get back on the field! "

Support for a college football season can be found on Twitter at #WeWantToPlay.