Trump: 'The Only Path to Unity' Begins With 'Patriotic Education' 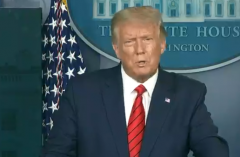 (CNSNews.com) - "The left's war on police, faith, history, and American values is tearing our country apart, which is what they want," President Donald Trump warned on Monday.

"The only path to unity is to rebuild a shared national identity focused on common American values and virtues, of which we have plenty," he told a news conference.

"This includes restoring patriotic education in our nation's schools, where they're trying to change everything that we've learned...cancel culture, whatever you want to call it," Trump said.

"At the same time, we must strictly and fully enforce our law and have no tolerance for anarchy and at no tolerance -- zero -- for violence. Anyone that breaks the law should be arrested, prosecuted, and punished.

"This includes targeting law enforcement efforts to focus on Antifa, the left-wing domestic terror organization. The mission of Antifa is to spread terror in the U.S. population with a goal of getting Americans to give up to their agenda."

Trump said if Democrat Joe Biden won't even say the name "Antifa," there's no way he can solve the problem: "You don't name it, you don't solve it."

In fact, he said, "Biden would give Antifa exactly what it wants, the far-left policy agenda it's asking for. And if that happened, we don't have much of a country left. If you give violent extremists what they want, the violence doesn't go away. They gain new power to spread the terror nationwide."

Trump said most of the nation is "extremely safe," but "you only see the bad. You see Portland and Chicago and you see what's happened in New York just in a very short period of time."

Trump accused Biden of surrendering to the "left-wing mob" that is now wrecking those cities:

But when you surrender to the mob, you don't get freedom, you get fascism. That's what happens in all cases. You take a look at Venezuela, look--look what's going on there and other places.

What happens is you give and give and give and you take and they no longer respect you. And that's what's happened with the Democrats because I actually think they've lost control of these radical-left maniacs."

In America, we will never surrender to mob rule, because if the mob rules democracy is indeed dead. The reason we are continuing to see violence in left-wing cities today is that liberal politicians, mayors, prosecutors and judges are refusing to enforce the law and put the rioters in jail. These are rioters. These are dangerous people. These are killers...

...This is the extreme left's agenda for America. They want to appoint radical prosecutors, judges, and federal officials who will set criminals free. Their stated plan is to cut police funding, abolish cash bail, close down prisons, reeducate our children, preach left-wing social justice, establish a national sanctuary for criminal illegal aliens, and abolish the death penalty even for cop killers.

Trump said he could quickly regain control of the troubled Democrat-run cities: "All they have to do is say please come in. As you know, they have to ask, unless we go a much tougher route, which we could, which you don't like to do that. They have to ask you to come in. When they asked me to come in, will be there within a matter of minutes."

Trump reminded his audience that he signed an executive order setting ten-year prison sentences for people who destroy monuments and statues: "It immediately stopped. That was three months ago or so."

He also noted that in the first two years of his presidency, the number of murders went down significantly.

And in June, the Trump administration launched Operation LeGend, which surged federal law enforcement to cities plagued by violent crime.

"While I am president, we will defend the rights of law-abiding citizens, we will honor the heroes who keep America safe. And we do, we honor our police. We honor our law enforcement."