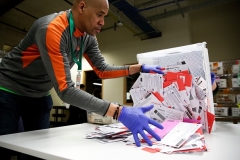 An election worker sorts vote-by-mail ballots for the presidential primary at King County Elections in Renton, Washington on March 10, 2020. (Photo by JASON REDMOND/AFP via Getty Images)

(CNSNews.com) - President Trump is an outspoken critic of vote-by-mail, and the topic merited all caps as he tweeted Monday morning:

RIGGED 2020 ELECTION: MILLIONS OF MAIL-IN BALLOTS WILL BE PRINTED BY FOREIGN COUNTRIES, AND OTHERS. IT WILL BE THE SCANDAL OF OUR TIMES!

Barr warned that if people lose confidence in the outcome of the election, "that could take the country to a very dark place."

On the other side of the debate, former Georgia State lawmaker Stacey Abrams told MSNBC's "Morning Joe" on Monday that Trump is trying to undermine voting by mail because he worries that he'll lose:

It's entirely his intent to undermine the process of voting because he understands and has admitted, if eligible Americans cast their ballots, he will lose. We know vote by mail is a critical part of how voting has to occur in 2020 to ensure that as many people as possible can vote safely from home.

But it's not only about those who can vote safely from home, as many people who can vote thru vote by mail, that reduces the number of people who will be in line. There are populations that have no choice. There are folks who are disabled, who have been displaced by COVID, who are homeless, who have language barriers. And if you're African-American or Latino, you're twice as likely to have your ballot rejected. Some people have no choice but to show up in person.

We want vote by mail to reduce the number of people who have to be in line on Election Day. That keeps everyone safe. And that means our democracy can work.

Abrams noted that 34 states allow vote by mail with no excuses, "which means at this moment, if you want to vote by mail in 34 states, you can do it and they have the capacity to do so. What they don't have is the ability to scale it as high as we know need will likely be."

We have 16 additional states that require an excuse, either disability, age or infirmity. Unfortunately, about four of those states are immovable on the use of COVID-19 as a justifiable infirmity to qualify you for mail-in ballots.

But we know that the challenge is not whether you have access alone, it's whether the states can meet the scale. We know states are crippling. They're under a crippling debt because of the tax implications of the COVID-19 pandemic. They are cash-strapped and to scale appropriately, they need the Senate to take action.

The adoption of the Heroes Act, which will provide $3.6 billion in funding for elections as well as guardrails so that no matter where you live in the country, for the first time, we have uniformity in how elections happen. And this would also provide opportunities for communities that have too many restrictions on their access, to have those restrictions actually meet a national standard.

All it takes is action by the U.S. Senate. And we know that Mitch McConnell recognizes he, too, would be in jeopardy. If we have full participation, when Americans speak right now, they're speaking with a single voice saying, it is time for change.