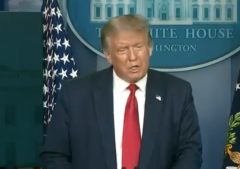 (CNSNews.com) - After urging all Americans to continue social distancing, hand-washing, and wearing a mask in crowded places, President Trump on Monday said lockdowns "do not prevent infection in the future," and they are not a "viable path" to producing healthy people or a healthy economy.

"It is important for all Americans to recognize that a permanent lockdown is not a viable path toward producing the results that you want or certainly not a viable path forward and would ultimately inflict more harm than it would prevent," Trump told a news conference.

Lockdowns do not prevent infection in the future. They just don't. It comes back -- many times comes back.

The purpose of a lockdown is to buy time to build capacity, especially as it respects to with respect to hospitals, learn more about the disease and develop effective treatments as we did in the United States. We are doing very well with the vaccines and the therapeutic.

Countries where there have been very significant flare-ups over the last short period of time, are Spain, Germany, France, Australia, Japan, and also, as you probably heard in Hong Kong, they have had some very serious flare-ups...

In our current phase, we must focus on protecting those at highest risk while allowing younger and healthier Americans to resume work and school with careful precautions. Ideally, we want to open those schools. We want to open them.

At the same time, we are placing an emphasis on continuing to drive down the mortality rate with improved care, treatment, and medical interventions building a bridge to the introduction of a vaccine. The vaccines are coming along incredibly well.

Trump told the news conference that his administration last week distributed 2,979 cases of the drug remdesivir, or enough to treat around 19,000 COVID patients. "And those numbers will be going up rapidly as we move along," he added.

Meanwhile, Trump said hospitals are reporting "an adequate supply of steroids, such as dexamethasone, that are used successfully in late-stage illness."

On the development of possible vaccines, Trump said his administration is "balancing speed and safety."

"And we're on pace to have a vaccine available this year, maybe far in advance of the end of the year. And we're mass-producing the most promising candidates in advance so that we're ready immediately upon approval."

Trump said the military will deal with the logistics of vaccine distribution.  "It's all about logistics. They deliver a lot of things, including soldiers. But now they'll be doing vaccine. Our general is all ready to go, and he's very excited.

"By unleashing America's technical and scientific brilliance, we will end this pandemic and we will hopefully end it very quickly. The therapeutics are very exciting to me where you can go into a hospital and whether it's through a shot or a transfusion, you take care of somebody and they get better. That's something, to me, that's very important," President Trump said.