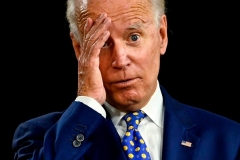 (CNSNews.com) - Here's one of the Monday morning tweets from President Donald Trump: "Joe Biden called me George yesterday. Couldn’t remember my name. Got some help from the anchor to get him through the interview. The Fake News Cartel is working overtime to cover it up!"

Biden, along with his wife Jill, was addressing an "I Will Vote" concert via video on Sunday when he made the point that this is a most consequential election:

"Four more years of George, uh -- George uh -- he, uh --we're going to find ourselves in a position where, if Trump gets elected, we're going to be in a different world."

In a "60 Minutes" interview that aired on Sunday, CBS's Norah O'Donnell told Biden, "Donald Trump says you have dementia and it's getting worse."

Biden responded: "Hey, the same guy who thought that the 9/11 attack was a 7-Eleven attack. He's talking about dementia? All I can say to the American people is watch me, is see what I've done, is see what I'm gonna do. Look at me. Compare our physical and mental acuity. I'm happy to have that comparison. "

O'Donnell noted that Biden's age makes his choice of vice president particularly important.  She asked him why he thinks Sen. Kamala Harris would be ready to lead the U.S. government "if something were to happen to you."

"Number one: her values," Biden responded. "Number two: She is smart as a devil. Number three: She has a backbone like a ramrod. Number four: She is really principled. And number five: She is-- has had significant experience  in the largest state in the union, running a Justice Department that's only second in size to the United States Justice Department. And-- you know obviously I-- I hope that never becomes a question."

Harris has been a sitting U.S. senator for only four years.