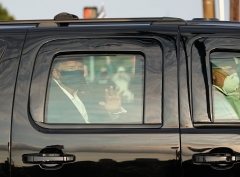 President Trump drives past supporters in a motorcade outside of Walter Reed Medical Center in Bethesda, Maryland on October 4, 2020. (Photo by ALEX EDELMAN/AFP via Getty Images)

“This is the real school. This isn’t the let's-read-the-book school. And I get it, and I understand it. And it's a very interesting thing…”

The president also thanked his supporters gathered outside the hospital, then did a drive-by thank you, waving to the crowd from his motorcade.

(Trump’s full statement is printed below.)

Trump posted the video and made the motorcade appearance after conflicting reports emerged about his health, and amid media anger over the perceived lack of transparency about his doctors' health briefings.

Although Trump looked okay on video Sunday, Chief of Staff Mark Meadows told reporters on Saturday, "His vitals over the last 24 hours were very concerning. We're still not on a clear path to a full recovery."

And the good news is, is the president feels very well. And he actually wants to get back home to the White House and get back to work. But I think he's going to stay at Walter Reed for at least another period of time.

Look, I went through this virus myself, as you know, Margaret, over the summer. And even if you have no symptoms, and I would -- I had very, very minor symptoms, day seven and eight are the critical days.

So I think the doctors want to make sure that they're there for the president and that he's getting the best treatment. But he's doing well.

I spoke with him, to answer your question, on Friday. I was in Geneva holding some talks with the Russian team, my -- my counterpart, General Patrushev, and I was able to call the president after he was tested positive to give him an update on the talks, get his feedback for the afternoon sessions.

And he was in good spirits and was firmly in control.

O'Brien said there's no reason to think the president can't discharge his duties from Walter Reed  Medical Center: "And so far, the president's in great shape. He's firmly in command of the government of the country."

President Trump told his supporters in the video tweet:

We're getting great reports from the doctors. This is an incredible hospital, Walter Reed, the work they do is just absolutely amazing and I want to thank them all -- the nurses, the doctors, everybody here.

I've also gotten to meet some of the soldiers and the first responders, and what a group. I also think we're going to pay a little surprise to some of the great patriots that we have out on the street. And they've been out there for a long time. They've got Trump flags and they love our country.

So I'm not telling anybody but you, but I'm about to make a little surprise visit.  So perhaps I'll get there before you get to see me. But I just, when I look at the enthusiasm, and we have enthusiasm like probably nobody's ever had. Our people that love the job we're doing. We have more enthusiasm than maybe anybody.

In the meantime, we love the USA, and we love what's happening. Thank you.