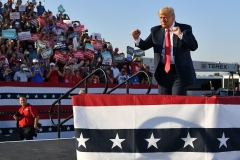 "Joe Biden is always and always has been a corrupt politician," Trump told a rally in Tucson on Monday. "If Biden wins, China wins. And China will own the USA," the president warned.

The New York Post reported last week that emails found on a  laptop computer apparently belonging to Hunter Biden indicate he cashed in on his father's vice presidency by making lucrative deals in China and Ukraine -- deals that happened only because his father held such an influential position.

According to the newspaper, one email "showed Hunter Biden introduced his father, who was at the time President Barack Obama’s vice president, to a top executive at Burisma, a Ukrainian energy firm whose board he sat on. The alleged meeting took place a year before Biden called for the ouster of a top Ukrainian prosecutor."

Biden called the report a "smear," and his campaign said there is no record of such a meeting.

But according to the New York Post, "Vadym Pozharskyi, an adviser to the Burisma board, thanked Hunter Biden for the 'opportunity' to meet his father in an email sent on April 17, 2015. The messages were found on the hard drive of a laptop that the son allegedly dropped off at a Delaware computer shop and never returned to pick up."

The New York Post also reported that Hunter Biden "pursued lucrative deals involving China’s largest private energy company — including one that he said would be 'interesting for me and my family.'"

One email sent to Biden on May 13, 2017 mentioned an unspecified business venture with a Chinese energy company. That email outlined a “provisional agreement” to "distribute the equity" -- with 80 percent of the shares to be split among four people, 10 going to another person, and then, in question form, "10 held by H for the big guy?"

Fox News says it has confirmed that the "big guy" is Joe Biden.

"Now you have the laptop, it’s over," Trump told the Tucson rally:

Remember he said, no, I never met anybody from -- Burisma is it? Is it Burisma? Actually I -- that I understand. Because he’s got no memory left. It’s gone. Is it Burisma?...And then they show a picture of him playing golf with the head of Burisma. Ah, boy, oh boy. If Biden wins, China wins. And China will own the USA.

Remember what I said? The media and big tech is trying to hide the entire scandal...Because they know that publicizing these revelations would mean an end of Biden’s presidential run. I think it’s an end right now. Look, I think it’s an end right now. How the hell could you do, when you see the kind of things that they do, where the big guy has to get at least 10 percent, the big guy. I wonder -- know who the big guy is? Gee, I wonder.

If you put him as president, you should be ashamed of yourselves, you want to know the truth. I’m not just running against Biden, I’m running against the left-wing media, the big tech giants, and the Washington swamp. And I’ve been running against it from the beginning. And here I am all by myself. Aye yi yi. Anybody else, they would have been in a corner right now thumb in mouth saying, “Mommy, take me home, mommy. I want to go home.”

No, it’s great. You know why it’s great though? Because nobody’s ever done what we’ve done. Nobody...

(The crowd broke into chants of "drain the swamp.")