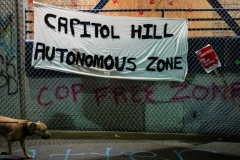 In a second tweet, the president wrote: "Radical Left Governor @JayInslee and the Mayor of Seattle are being taunted and played at a level that our great Country has never seen before. Take back your city NOW. If you don’t do it, I will. This is not a game. These ugly Anarchists must be stooped IMMEDIATELY. MOVE FAST!"

A six-block area of Seattle is now occupied by "an unreasonable activist crowd," as one police union official put it.

They have set up what they're calling the "Capitol Hill Autonomous Zone" around the evacuated East Seattle Police Precinct, and so far, the city has not moved to take back its property. Quite the contrary:

According to an announcement from the Seattle Mayor's Office, the decision to "allow protesters to freely move in and around Capitol Hill was an important step in the City’s efforts to lead with de-escalation and rebuild community trust. The City is committed to creating a safe space for peaceful demonstrations, and will also take steps to minimize property damage or potential injuries."

We are beside ourselves. The city has lost all the political will to enforce the rule of law. There is an unreasonable activist fringe that has unfortunately stealing the peaceful protest message for justice for George Floyd and then now they are occupying over a six block area of the city of Seattle.

And it's absolutely unreasonable activism and we are pulling our hair out because we are true public safety professionals that took an oath of service, and we are holding our elected leaders responsible for this travesty on the overall amazing Seattle community that are law-abiding citizens that are yearning for police officer, public safety services, which we professionally provide on a daily basis. It's out of control.

Sloan questioned why the Seattle City Council and the occupation activists are "taking control of this public safety narrative, which is impacting every one of us."

"This is a continuing criminal enterprise," she said. "And they're occupying land that is not theirs. They are occupying streets and taking it over as if they are an unelected sovereign authority. That's not how we roll in the United States. It's ridiculous. Everyone's talking around what this is -- this is a Marxist cultural revolution set about to destroy everything that came before it."

Sloan said police are caught in the middle. "We've lost a precinct. Now what’s next? Are we going to lose another precinct?"

Sloan said city leaders have banned police from using "less lethal munitions" such as stun guns that would help them protect city property and themselves.

"That has now been taken away. So what's left? How are we supposed to defend the rest of those precincts? What about the community's voice?"

Asked if the usurpers are trying to "spark some type of violent interaction," Sloan called the observation "spot on."