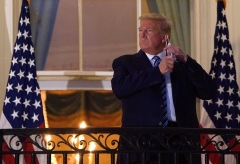 President Donald Trump takes off his facemask as he returns to the White House from Walter Reed Medical Center on Oct. 5, following treatment for Covid-19. (Photo by NICHOLAS KAMM/AFP via Getty Images)

(CNSNews.com) - President Donald Trump is telling the nation not to let COVID "dominate your lives."

Later Monday night, Trump posted another video to Twitter, saying he knew the danger posed by the highly contagious virus, but "I stood out front. I led. Nobody that's a leader would not do what I did."

According to his doctors, Trump has not yet fully recovered from his illness, but he's getting the medical care he needs at home.

At least 197,029 people have died from COVID in this country, according to the official death toll based on death certificates submitted to the Centers for Disease Control and Prevention's National Center for Health Statistics.

Here are the president's full remarks, intended to reassure the country but already producing more scorching criticism, as deaths from the virus keep rising:

I just left Walter Reed Medical Center, and it's really something very special. The doctors, the nurses, the first responders. And I learned so much about coronavirus. And one thing that's for certain.

And I know there's a risk. There's a danger. But that's okay. And now I'm better, and maybe I'm immune, I don't know. But don't let it dominate your lives. Get out there. Be careful.

Steve Cortes, a senior campaign adviser to the Trump campaign, told Fox News's Laura Ingraham Monday night it's not Trump's fault that he contracted COVID: "All precautions were taken," Cortes said, despite criticism of Trump's many appearances among maskless crowds.

"The only people who are culpable or to blame for the coronavirus is the Chinese Communist Party," Cortes said.

Cortes said the recovering president intends to "continue our path towards normalcy" with the goal of "rebuilding prosperity in this country."