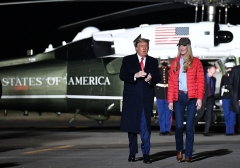 President Donald Trump arrives for a rally in support of Republican incumbent senators Kelly Loeffler and David Perdue in Dalton, Georgia on January 4, 2021. (Photo by MANDEL NGAN/AFP via Getty Images)

(CNSNews.com) - Immediately after saying "Hello, Georgia" last night, President Donald Trump told a crowd of his supporters. "By the way, there's no way we lost Georgia. There's just no way. That was a rigged election, but we're still fighting it, and you'll see what's going to happen."

Trump told the crowd he's run in two elections. "I won both of them, it's amazing. And I actually did much better on the second one," he said in the first moments of his speech.

Only then did Trump turn to the matter at hand -- today's critical Georgia election that will determine which party controls the U.S. Senate.

"Tomorrow, each of you is going to vote in one of the most important runoff elections in the history of our country," Trump said.

"Frankly, forget about runoff...it's a biggie," he said. "Our country's depending on you. The whole world is watching the people of Georgia tomorrow."

Then the president returned to the subject that has preoccupied him since Nov. 3:

Then it was back to the purpose of his visit: "You are going to get everyone you know, you're going to show up at the polls in record numbers. You've got to swamp them. And together, we are going to defeat the Democrat extremists and deliver a thundering victory.'"

Trump warned of the consequences if Republicans don't prevail:

The radical Democrats are trying to capture Georgia's Senate seats so they can wield unchecked, unrestrained absolute power over every aspect of your lives. If the liberal Democrats take the Senate or the White House -- and they're not taking this White House, we're going to fight like hell, I'll tell you right now.

You know, I was telling Kelly before, you can lose, and that's acceptable. You lose, you lose and you go -- and you go wherever you're going and you go and say maybe I'll do it again sometime or maybe I won't -- or I get back to life.

"But when you win in a landslide, and they steal it and it's rigged -- it's not acceptable.

Trump noted that if Republicans Kelly Loeffler and David Perdue do not hold their U.S. Senate seats -- "and if we don't take the presidency" -- the country will be run by Sen. Chuck Schumer, House Speaker Nancy Pelosi, and Joe Biden.

"The people of Georgia will be at the mercy of the left-wing socialists, communists, marxists. And that's where it's going," Trump said.