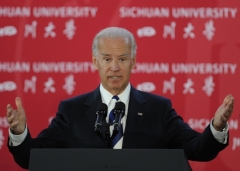 Just hours earlier, Biden told CNN, "We (the Obama administration) wanted China to grow. We don't want to have a war with China."

Trump told Michigan supporters how important the upcoming election is:

Joe Biden devoted his career to offshoring Michigan's jobs, outsourcing...Michigan's factories. Throwing open your borders, drags us into endless wars and dragging your children to far-away lands. Biden supported every disastrous sell-out including NAFTA, China and TPP. You know that. Joe Biden surrendered your jobs to China and now he wants to surrender our country to the violent left wing mob. You're seeing that every night.

A few hours earlier, CNN's Jake Tapper aired his interview with Biden, noting that in an August 2011 speech delivered in China, Biden said, "It is in our self-interest that China continue to prosper."

"Do you think, in retrospect, that you were naive about China?" Tapper asked Biden.

Here's the thing. In the context of that, we wanted China to grow. We don't want to have a war with China.

I said to Xi Jinping when I was -- I -- you may remember, the president wanted me to spend time with him as vice president. He was going to be president. And he couldn't do it. So I traveled around the world with him.

He asked. He said: "Why do you keep saying you're a Pacific power?"

I said: "Because we are --we are a Pacific power. And if we weren't, you would not have been able to have any stability at all."

So, what has Trump done? He's poked his finger in the eye of all our friends and allies, and he's embraced every autocrat in the world.

So, when Xi Jinping said to me, we're going to make sure we have these air identification zones you can't fly through, I said, no, no that's not true. They are in international airspace. He said, what are you going to do about it? I said, we're going to fly through it.

So, we flew our bombers through it, flew our jets through it -- through it. Same way with what we did in terms of taking a significant portion of the Navy, 60 percent, and getting it into Asia to make sure they could not control those sea lanes, which they were doing.

At this point, Biden veered off-topic:

And what has he done with regard to our friends like Japan and other -- and South Korea? He's made some cockamamie deal to his good friend, sending love letters to Kim Jung-un.

I mean, what in God's -- I mean, to Kim in South -- I mean, in North Korea. What in God's name is that all about? He gave him legitimacy. We had firm, firm constraints on what they could buy and what they could sell in their economies. He's blown it. He's giving them so much credibility. They're closer to a nuclear weapon than they were before. He did the same thing in Iran.

I mean, this America first has made America alone.

Taking another look at Biden's 2011 speech at Sichuan University, the then-vice president said, "A rising China will fuel economic growth and prosperity and it will bring to the fore a new partner with whom we can meet global challenges together."

"When President Obama and I took office in January of 2009, we made our relationship with China a top priority.  We were determined to set it on a stable and sustainable course that would benefit the citizens of both our countries."

Together, we’re working to promote economic growth that is strong, sustainable and balanced, and trade that is free and fair. Trade and investment between our countries are growing rapidly in both countries, in both directions, creating jobs and economic opportunities in both countries.

We often hear about Chinese exports to the United States, but last year American companies in America exported $110 billion worth of goods and services to China, supporting hundreds of thousands of jobs in America. The American people and the Chinese people are hopefully -- are becoming aware that it’s in our mutual interest in each of our countries to promote that exchange.

A more prosperous China will mean more demand for American-made goods and services and more jobs back home in the United States of America.  So our desire for your prosperity is not borne out of some nobility.  It is in our self-interest that China continue to prosper.

Every day it becomes clear that as the world’s two largest economies with ever growing ties of investment and commerce, what you do matters to us and matters to the American people. And what we do matters to you and to the people of China. To state it bluntly, we have a stake in one another’s success.

In May 2019, Trump told a rally in Florida, "I just announced that we’ll increase tariffs on China, and we won’t back down until China stops cheating our workers and stealing our jobs, and that’s what’s going to happen, otherwise we don’t have to do business with them.”

The Trump administration has not given up on a new trade agreement between the two countries, despite recent irritants in the U.S.-China relationship, most notably China's lack of transparency on the coronavirus pandemic.

As recently as August 24, U.S. and Chinese officials held a regularly scheduled call "to discuss implementation of the historic Phase One Agreement between the United States and China.

According to a read-out of that call from the Trade Representative's Office:

"The parties addressed steps that China has taken to effectuate structural changes called for by the Agreement that will ensure greater protection for intellectual property rights, remove impediments to American companies in the areas of financial services and agriculture, and eliminate forced technology transfer.  The parties also discussed the significant increases in purchases of U.S. products by China as well as future actions needed to implement the agreement.  Both sides see progress and are committed to taking the steps necessary to ensure the success of the agreement."