Trump Attorney: 'This Is What the Democrats Do...Create Fear' 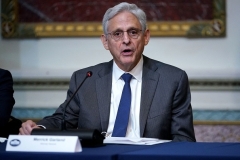 (CNSNews.com) - Christina Bobb, one of former President Trump's attorneys, said it's doubtful any nuclear documents were stored at Mar-a-Lago, but that hasn't stopped Democrats from fear-mongering.

She also said it's the Biden administration, not Trump, that owes the country an explanation for the search; and she said she doesn't believe that anyone in Trump's circle is an FBI informant.

"This is what the Democrats do," Bobb told Fox News's Laura Ingraham Thursday night:

"If they don't have any good reason for doing what they did -- the pathetic presser that Merrick Garland held for three minutes was insufficient --so they had to create fear. Normally they should come out with exactly what happened and why and explain themselves, and if it was a good reason, they would have solid ground.

"They are not on solid ground so they had to come up with something that would potentially terrify the American public into freely giving up their constitutional freedom. You know, if We are on the verge of nuclear war, giving up the nuclear codes, maybe it's acceptable that they violated the president's constitutional rights.

"It was not acceptable, and they're trying to come up with reasons to make it sound appropriate and make it sound okay because they don't actually have a good reason for doing what they did."

Bobb said she doesn't think there were any nuclear documents in Trump's possession, although she has not spoken to Trump about that.

She said the legal team, including her, "has done a very thorough search, and had turned over -- we've been very cooperative with the Biden administration and the DOJ and turned over everything we found that we had. So it's my understanding on very good belief based on a thorough investigation that there was nothing there."

Bobb said FBI agents left her outside in the Florida heat for eight or nine hours on Monday, refusing to let her observe what they were doing.

She also said it's up to President Trump to decide if he wants the sealed warrant and supporting documents released. And indeed, a few hours after Bobb's appearance with Laura Ingraham, Trump issued a statement saying, "Release the documents now!"

Bobb said it's the Biden administration that owes Americans an explanation, not President Trump.

"It was the Biden administration that took an egregious step to violate constitutional rights of a president of the United States and invade his personal residence. And now they want to try to shirk that responsibility by just saying, well, why doesn't he release it?

"No, no no, they owe us an explanation -- they can't get out of it that quickly," Bobb said. "And I'm sure President Trump is going to make his decision [he did so overnight], and I know that he bases his decisions on what he believes is best for the country and what will bring us together and unite us. And I'm sure that that is the driving factor for his decision."

Bobb said she doesn't believe that a Secret Service agent or "anyone in his circle" is an FBI informant.

"I think it's a story that the leftist media wants to try to paint the picture that somehow there's division within the Trump camp -- there's not. And to the extent that they think there's an informant or some other type of division that's causing this, I'll believe it when I see it. I'll reserve that judgment.

"But I think this squarely falls on the shoulders of the Biden administration, and I want to see what they've got, because I don't think they have enough for their actions."