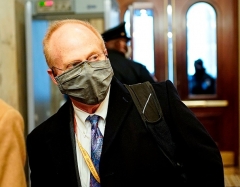 Schoen pointed to the professionally produced video spliced together by Democrats to intersperse Trump's words at various times with the mayhem at the Capitol.

"They would be thrown out of the courtroom for showing this video," Schoen said about the House Democrats' case.

None of this stuff would be admissible in any kind of court of law. That's part of the due process issue.

I don't know if you saw it today, when Senator Mike Lee stood up and objected that they falsely attributed to him statements that he never made, and he made an objection. And the whole place sort of blew up in a hullabaloo.

And finally, the House Manager, Congressman Raskin, said that they would withdraw it for now and check their sources. He said he thinks their source...I think the "Washington Post" he might have said.

Schoen said "it's a pretty good bet" that Trump's defense will show videotape of Democrats saying provocative things that meet the incitement standard they are now using for Trump.

"I offered to stipulate right in the opening address that I made to the (Senate) that the riot happened, it was horrific, and so on," Schoen said.  "And I said, you talked about unity and healing, showing that tape over and over again, the same slides and so on, and manipulated by them, does nothing for healing. It's the exact opposite.

"It's continuing to open wounds for the American public. And it is something that President Trump has condemned in no uncertain terms, the terrible violence that went on there. So there's not an issue about that. They're just hoping to drum up emotion and get their last shots in at President Trump."

Schoen told Ingraham, "I think that you'll be quite impressed with the president's case. And I say that without wanting to even have to do that. We shouldn't be here. It's an illegitimate, unconstitutional impeachment process..."

Schoen, however, lost on the constitutional argument: The Senate voted 56-44 on Tuesday to proceed to the trial, with six Republicans joining all the Democrats.