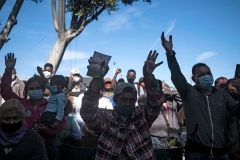 Migrants pray at camp where they wait for US authorities to allow them to start their asylum process outside El Chaparral crossing port in Tijuana, Baja California state, Mexico on March 17, 2021. (Photo by GUILLERMO ARIAS/AFP via Getty Images)

(CNSNews.com) - When it comes to illegal immigration, Texas is the hardest-hit state, given its 1,254 mile border with Mexico.

The recent surge is bad enough, and it will get worse, Texas Gov. Greg Abbott told Fox News's Sean Hannity on Wednesday:

"Listen, this has turned into a total catastrophe, and it's getting worse by the day," Abbott said, as he demanded access to the unaccompanied children to find out who’s doing the human trafficking.

Americans need to know this -- this is just the very beginning of what's going to be a massive expansion of the number of people coming across the border. It will grow tenfold and a hundredfold, especially because of the way the Biden administration has handled this.

Remember during the presidential campaign when all of the candidates said, we want open borders. Well, guess what? Biden has provided those open borders. He's inviting everybody in and the flood gates are now open, and Texas is at the forefront of it.

You had Jen Psaki talking about wanting to be transparent (see below) -- the Biden administration is not being transparent with either the governor of Texas or the Texas Department of State Health Services. We need to know what the health situation of these kids are. We need to know if they've been exposed to variants of COVID, and if so, is it the Brazilian variant or whatever type of variants?

Our law enforcement, the Texas Department of Public Safety, they need to do their job. Part of their job is making sure they track down and prosecute anybody involved in smuggling.

Once the kids get over to the state of Texas, they are still involved with coyotes and smugglers and people like that that we do have the ability to arrest and put behind bars. The Biden administration is not letting us gain access to that information so that we can arrest and prosecute those who are assisting this immigration process.

Abbott said state officials have sought access to shelters and been denied:

You've got some young children who've been trafficked across Mexico and maybe some other countries and who knows what horrific things may have happened to them. What I can tell you is Texas has a top-notch human trafficking prosecution unit, and we want to be involved and learn the information so that we can crack down on this human trafficking mission.

Sean, we need to -- we need to expose this for what it is, because President Biden continues to invite in young children with the promise of them being able to stay here, these children make a very dangerous trek where they have to encounter cartels, drug dealers, gang members, MS-13 gang members and there could be horrific things happening to them.

We know the legacy of the human trafficking that happens to these children. It must be stopped.

(Earlier on Wednesday, Gov. Abbott said he was "directly asking the Biden administration to allow the Texas Department of Public Safety to access" the convention center in Dallas "as well as the other federally run facilities in Texas to be able to talk to these unaccompanied minors. We must get to the bottom of the human trafficking and put an end to it," he said.)

'We remain committed to transparency'

At the White House press briefing on Wednesday, reporters complained about the lack of press access to places like the Dallas convention center where thousands of undocumented children are being housed.

"Why have we still not seen any images inside these facilities?" a reporter asked Psaki:

"We--we remain committed to doing that, and I think these facilities are overseen, HHS of course overseen--oversees the shelters. The DHS oversees the Border Patrol facilities and we want to work with them to ensure we can do -- respecting the privacy and obviously the health protocols required by COVID," Psaki said.

The reporter told Psaki the Biden administration could share redacted photos of conditions inside the holding facilities if it wanted to.

"Again we--we remain committed to sharing with all of you data on the number of kids crossing the border, the steps we are taking, the work we are doing to open up facilities," Psaki said.

"Our own bar we are setting for ourselves and improving and expediting the timeline and the treatment of these children and we remain committed to transparency. I don't have an update for you on the timeline for access, but it is certainly something we support."

A reporter told Psaki that Border Patrol agents are no longer allowed to let reporters ride along with them for a first-hand look at the overrun border. "It certainly it seems like there is an element of secrecy here. Why?" the reporter asked.

"I certainly wouldn't characterize it that way," Psaki said. "I know there's Border Patrol agents quoted in a lot of your stories ... it is not our policy to prevent people from talking."

She told reporters to go ask the Homeland Security Department. "I would point you to them for any additional questions about the logistics of press access," she said.

'We're not hiding anything'

President Biden's coordinator for the southern border Roberta Jacobson told MSNBC on Wednesday that the Biden administration is "not hiding anything," even though it seems to have muzzled Border Patrol agents and refuses to let reporters see what's happening in the child migrant shelters.

NBC's Andrea Mitchell told Jacobson: "Multiple organizations, including NBC News, are reporting that they are not getting access, information from these overcrowded border processing facilities, and that the Border Patrol is particularly denying information today. Can you resolve that?" she asked.

"Well, I certainly would urge NBC and others to talk with the Department of Homeland Security and with Customs and Border Protection," Jacobson said. "I will certainly take back the question.

"I also think that it's really important that we be setting about the task of moving children to appropriate places. We're not hiding anything. We do want to be sure that the story is told transparently. But we're also in a situation of urgent need for children and need to move children. And that has to take first priority."