Texas AG: 'We Can't Stop People From Doing Bad Things…But We Can Harden the Schools,' Arm the Teachers 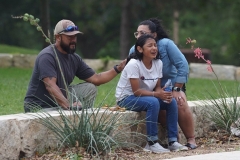 A girl cries after the mass shooting at the Uvalde, Texas elementary school on May 24, 2022. (Photo by ALLISON DINNER/AFP via Getty Images)

An 18-year-old gunman from a broken home killed 19 children and two teachers at the Uvalde elementary school on Tuesday, reportedly barricading himself in a fourth-grade classroom.

"We have a crime victims’ assistance group that we're sending down right now to Uvalde. That's the first step for us, is to take care of these families. Take care of their medical and take care of psychological needs. Just try to help them.

"Second, we need to continue to try to focus on preventing this. We can't stop bad people from doing bad things. They're going to violate murder laws. They're not going to follow gun laws. I've never understood that argument.

"But we can harden the schools. We can create points of access that are difficult to get through. We can potentially arm and prepare and train teachers and other administrators to respond quickly, because the reality is, we don't have the resources to have law enforcement at every school. And so, it takes time for law enforcement, no matter how prepared, no matter how good they are, to get there.

"So having the right training for some of these people at the school is the best hope. And nothing's going to work perfectly. But that, in my opinion, is the best answer to this problem."

Paxton said "absolutely" it's possible to arm teachers: "That's something that should be done. They are the ones on the ground. They are right there.

"If we're going to save these kids and stop mass shootings from occurring, we have to have people that are prepared and trained to react appropriately and quickly with urgency, because we just don't have the resources to get law enforcement there quickly. This has to be part of the solution. "

"I've been to a lot of funerals, a lot of services, a lot of hospitals," Lt.-Gov. Patrick told Tucker Carlson:

"When I grew up -- and most of the people watching grew up, and you -- we didn't have these situations. We didn't have mass shooters in our schools; we didn't have this evil, and so we really have to look at us as a people, as a country, because we can do a lot of things.

"And Texas has done a lot of things after the Seventh Day (Sutherland Springs church) shooting. Obviously we have to do more. We have to harden these targets so no one can get in ever except through one entrance. Maybe that would help. Maybe that would stop someone.

"But it's really bigger than that, Tucker. We're a core society. We're a society that's just at each other's throats all the time. And we're better than this as a nation."

"Because I guarantee you, we don't know these stories yet, but all of those teachers were heroic today. I guarantee you everyone did what they did in Santa Fe -- they took their kids and they sheltered them in place and they took them to protect their lives, and teachers shouldn't have to have to do that."