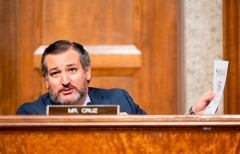 (CNSNews.com) - Sen. Ted Cruz (R-Texas) said Tuesday was a "rough day" for Big Tech, as the CEOs of Twitter and Facebook took sharp questions about censorship from Republicans (but not from Democrats) on the Senate Judiciary Committee.

"And 'tween Facebook, Twitter, and then Google, which is really the 800-pound gorilla, we have enormous concentration of power, and I think they collectively pose the single greatest threat we have to free speech in this country, because they've been getting more and more brazen," Cruz told Fox Business Network after the Senate hearing.

Cruz said Twitter is "the most brazen" about censoring speech it disagrees with -- slapping warning labels on many of President Trump's tweets and banning from its platform a New York Post report about Hunter Biden's alleged influence peddling when his father was vice president.

"Big Tech asserted the power to just silence them because they didn't like what they were reporting," Cruz said. "I think it's really dangerous."

Cruz also criticized Democrats on the Judiciary Committee for giving a pass to social media censorship:

I think that is really, really dangerous. And I do think you're going to see the abuses of power get worse in coming years with -- aided and abetted by Democrats that want to silence someone who disagrees.

The first...is repealing what's called Section 230 of the Communications Decency Act. Section 230 is a special immunity from liability that Congress gave big tech that nobody else has. It's essentially -- it's a subsidy to big tech.

And the reason Congress gave it over 20 years ago was because Congress believed at the time tech would be neutral, would be a public forum, essentially a fair marketplace of ideas. Big tech isn't pretending to do that anymore. Now they're openly censoring. They shouldn't get a special immunity from liability.

The third avenue is focusing directly on consumer deception and breaking the promise to consumers. And stated very simply, when you sign up for social media, the promise they make to you is, if you follow someone, you're going to see what they have to say, and if someone follows you, they're going to see what you have to say. Big Tech is breaking that promise every day. They don't like your views, they silence you, they shadow ban you, and I think we ought to pursue all three of them.

I will say though, today's Democrats don't want to pursue any of them. Instead, they're viewing their roles as protectors of big tech and wanting big tech to censor even more, not less.

At Tuesday's committee hearing, Sen. Cruz made the point that Twitter is acting as a publisher, not an information distributor, when it decides to block certain tweets or label them in some way.

Dorsey argued that Twitter was not acting as a publisher when it censored The New York Post. He said Twitter's policy is to block the distribution of hacked materials.

"Except your policies are applied in a partisan and selective manner," Cruz told Dorsey. "You claim it was hacked materials, and yet you didn't block the distribution of The New York Times story that alleged to talk about President Trump's tax returns, even though a federal statute makes it a crime to distribute someone's tax returns without their consent. You didn't block any of that discussion, did you?"

Cruz asked Dorsey "Did you block Edward Snowden when he illegally released material?"

"I'm--I--I don't have the answer to that," Dorsey responded.

"The answer is no," Cruz said. "You have used this in a selective manner."

"Well, why then is Twitter right now putting purported warnings on virtually any statement about voter fraud?" Cruz asked.  (Many of President Trump's recent tweets about voter fraud are labeled and/or suppressed.)

Dorsey replied, "We are--we're simply linking to a broader conversation so that people have more information."

"No, you're not!" Cruz said. "You put up a page that says, 'Voter fraud of any kind is exceedingly rare in the United States.' That's not linking to a broader conversation. That's taking a disputed policy position. And you're a publisher when you're doing that. You're entitled to take a policy position, but you don't get to pretend you're not a publisher and get a special benefit under section 230 as a result."

Also See:
Twitter CEO on Blocking Hunter Biden Story: ‘We Admitted This Action Was Wrong and Corrected It Within 24 Hours’