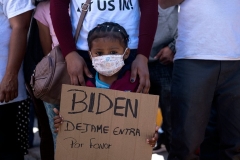 A Honduran girl holds a sign asking President Biden to let her into the U.S. during a rally at the San Ysidro crossing port in Tijuana, Mexico on March 2, 2021. (Photo by GUILLERMO ARIAS/AFP via Getty Images)

(CNSNews.com) - "We must stop romanticizing illegal immigration. It is cruel. It is wicked. It kills people," former Trump adviser Stephen Miller warned on Tuesday night, as the Southwest Border crisis worsens by the day.

Miller said the smugglers are sophisticated, and because of their efforts, drugs and adults posing as minors are flowing into America's schools and neighborhoods:

One of the biggest things that we saw when we were in the White House was that they would drop off huge numbers of children or huge numbers of families to divert Border agents, and then using that opening, they would try to send across contraband or criminals or large amounts of drugs.

And where do those drugs end up? They end up in your schools. They end up where your children live, where your families go to work. People die. Lives are destroyed. Communities are wrecked.

Not to mention the fact that right now, you have thousands of young children being trafficked at our southern border because the Biden administration has promised that they will be granted entry, and they are being granted entry.

So if you come from the Northern Triangle, if you come from South America, or any other part of the world, and you just say you're 17 you're getting in. Border agents are now seeing people, and again, I talked to folks today, that they know they're 19. They're 20. They're 21. And they're just saying they're 17 to get into the country.

Well, you know what? Some of those adults are going to end up in high schools around America, if they're open at all, pretending to be minors. This is a fundamental safety issue for America's children.

Another thing that we saw is that vicious gangs like MS-13 use this as a recruiting pipeline. They will send gang members posing as harmless minors who are 17 years old, or maybe they're 18 or 19. And they go to Long Island, and they go to Los Angeles and they go elsewhere, and they commit heinous crimes.

Yes, this is a crisis. Border agents, most of whom are not vaccinated, are being exposed every single day to large numbers of migrants. We don't have the capacity as a country to handle numbers this large.

And meanwhile, HHS (the Department of Health and Human Services) cannot track where these minors are going. Over 90 percent of them will never appear in an Immigration Court. Many of the sponsors themselves are here illegally. Fake Social Security numbers. They don't have healthcare, they can't provide for the minors they are supposed to be taking care of. It's a calamity.

At the White House press briefing on Tuesday, Biden spokeswoman Jen Psaki told reporters, "We are not encouraging people to come. But we also believe differently from the past administration that we are not going to turn away kids who are under 18."

Now Biden is urging Congress to pass his immigration bill, which includes a pathway to citizenship for every one of the many-millions of people who are in this country illegally. Biden also favors sending billions of dollars to corrupt Central American countries to address the "root causes" of illegal immigration.

All of that -- as well as the Biden administration's "children welcome" message -- is seen as a green light by foreigners who plan to cross the border illegally.

"It took them the new administration only a few weeks to turn this unprecedented accomplishment into self-inflicted humanitarian and national security disaster by recklessly eliminating our border, security measures, controls, all of the things that we put into place," Trump said.

"Joe Biden has triggered a massive flood of illegal immigration into our country, the likes of which we have never seen before. They’re coming up by the tens of thousands. They’re all coming to take advantage of the things that he said that’s luring everybody to come to America.

"And we’re one country. We can’t afford the problems of the world, as much as we’d love to. We’d love to help. But we can’t do that. So they’re all coming because of promises and foolish words," Trump said.

President Biden was briefed on the overrun Southwest border on Tuesday. According to Axios, he was told that 20,000 more beds are needed for an expected crush of unaccompanied minors – and others -- coming to this country illegally.

Axios also reported that Biden administration officials project that a record 117,000 unaccompanied children will arrive at our border in 2021.