Southwest Border Apprehensions in November 2020 Up 100% from November 2019 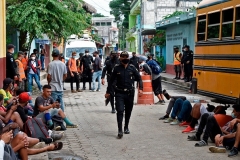 Policemen walk past a group of Honduran migrants, part of a US-bound migrant caravan, outside a migrant shelter in the municipality of San Marcos, Guatemala, on October 3, 2020. (Photo by ALFREDO ESTRELLA/AFP via Getty Images)

(CNSNews.com) - The number of people caught between ports of entry at the Southwest border doubled in November 2020 compared to November 2019, according to data collected by U.S. Customs and Border Protection.

According to CBP: “[D]uring the month of November, a total of 67,101 individuals were apprehended between ports of entry on our Southwest Border, compared to 67,639 in October and 54,771 in September.”

Beginning in March 2020, CBP’s monthly “apprehension” numbers include individuals encountered between ports of entry and either apprehended/detained or immediately expelled in the interest of public health as ordered by the Trump administration.

Apprehensions refers to the physical control or temporary detainment of a person who is not lawfully in the U.S. which may or may not result in an arrest.

Expulsions refers to individuals encountered … and expelled to the country of last transit or home country in the interest of public health under Title 42 U.S.C. 265.

The monthly totals presented in the table below show how many people CBP apprehended by fiscal year, which begins in October. (The monthly totals shown here do not include “inadmissibles,” or those people who lawfully presented themselves at ports of entry and were then denied admission.)

(Apprehension of illegal aliens by month and fiscal year/CBP data)

Amid the pandemic, the number of illegal aliens expelled by CBP far exceeds the number “apprehended” or processed.

For example, last month, 58,094 illegal border-crossers were immediately expelled in the interest of public health under Title 42 U.S.C. 265; Only 9,007 were processed under CBP’s Title 8 immigration authority.

According to CBP, “single adults” account for most of the recent illegal immigration -- 58,513 in November and 58,422 in October.

During the campaign, Democrat Joe Biden promised to build "a fair and humane immigration system -- restoring the progress Trump has cruelly undone and taking it further. "

The Biden campaign said, "He will secure our border, while ensuring the dignity of migrants and upholding their legal right to seek asylum. He will enforce our laws without targeting communities, violating due process, or tearing apart families."

Biden also has said in his first 100 days, "I will send an immigration bill to the United States Senate with a pathway to citizenship for over 11 million undocumented people in America.”