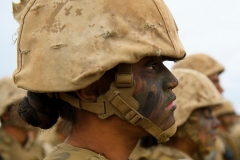 Among the provisions, the bill "Amends the Military Selective Service Act to require the registration of women for Selective Service," just as all men in the United States must register when they turn 18.

(House Republicans in 2016 rejected a measure requiring women to register.)

The Senate requirement for women to register follows a March 2020 report from the National Commission on Military, National, and Public Service, established by Congress to study the issue of potentially drafting women, among other things.

The Commission concluded that "the time is right to extend Selective Service System registration to include men and women, between the ages of 18 and 26. This is a necessary and fair step, making it possible to draw on the talent of a unified Nation in a time of national emergency."

According to the March 2020 report:

More than any other topic within the Commission's mandate, the question of expanding Selective Service registration to all Americans evoked a range of passionate and heartfelt views. Through its public comments, discussions, and hearings, the Commission heard from and met with many Americans who argue that women and men should have equal obligations under the law to register for the Selective Service System and to serve if called to do so.

Many others support women's right to serve voluntarily in the military but oppose requiring women to register for a potential draft. After listening to a range of perspectives from the American people on this issue, the Commission consulted with -- among others -- experts in constitutional law and military personnel policy; political leaders at the local, State, and national level; local draft board members; and influential members of various religious communities. The Commission also thoroughly researched the available evidence surrounding the issue.

After extensive deliberations, the Commission ultimately decided that all Americans, men and women, should be required to register for Selective Service and be prepared to serve in the event a draft is enacted by Congress and the President.

The Commission noted that registration is a process, separate from the draft, that provides the President with a pool of individuals for potential conscription into the Armed Forces, even those who are ineligible for military service.

The draft ended in 1973, and a new law would have to be passed to reinstate it. If that were to happen, the Selective Service System would then conduct a random lottery and call up registrants by year of birth. Individuals selected would next be examined by the Department of Defense for mental, physical, and moral fitness before being inducted into the Armed Forces.

As things currently stand, the Selective Service requires "all undocumented males 18 through 25 years of age, other than those admitted on non-immigrant visas" to register, whether or not they have a green card.

In addition to requiring women to register, the FY 22 NDAA would:

-- Fund a 2.7 percent pay raise for both military servicemembers and the DOD civilian workforce.

-- Create a new category of bereavement leave for military personnel that would permit servicemembers to take up to two weeks of leave in connection with the death of a spouse or child.

-- Increases parental leave to 12 weeks for all servicemembers for the birth, adoption, or foster care placement of a child.

-- Establishes a Basic Needs Allowance to ensure that all servicemembers can meet the basic needs of their families.

-- Requires parity in special and incentive pays for members of the reserve and active components.

-- Authorizes an increase in funding of $70 million for Defense-wide Operations & Maintenance, Department of Defense Education Activity, for Impact Aid, including $20 million for military children with severe disabilities.

The behemoth NDAA takes 39 pages to summarize, and that summary can be found here.