Sen. Ted Cruz: HR-1 Is 'Single Most Dangerous Piece of Legislation Before Congress' 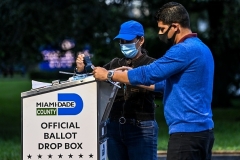 A poll worker helps a voter drop off her mail-in ballot at an official Miami-Dade County drive-thru ballot drop box at the Miami-Dade County Election Department in Miami on November 3, 2020. (Photo by CHANDAN KHANNA/AFP via Getty Images)

(CNSNews.com) - HR-1, the "For the People Act," should be called "The Corrupt Politicians Act," Sen. Ted Cruz (R-Texas) said on Wednesday.

The bill is a cherished part of the Democrats' leftist agenda because it would allow greater federal control of elections and make COVID-induced changes -- such as universal mail-in ballots -- a permanent feature of the electoral landscape.

"It is the single most dangerous piece of legislation before Congress -- what I call HR-1 is the corrupt politicians act," Sen. Cruz told Fox News:

It’s about ensuring that Democrats remain in power and control for the next 100 years. It is a radical bill. What does it do? It federalizes all elections; it strikes down every election reform protection at the state level. So photo ID laws -- right now in a lot of states, you’ve got to use photo ID to vote. The corrupt politicians act strikes that down.

It not only has that -- it mandates universal mail-in balloting. It mandates ballot harvesting. This is all designed to facilitate fraud. It is also welfare for politicians. For every dollar they raise, they get $6 of taxpayer money.

It is all about keeping Democrats in power. And the threat is to take away your right to vote by allowing millions of illegal immigrants and felons to vote I think it is a profound threat to our democracy and to our republic.

On the other side of the argument, Democrats say those who oppose the loosened voting rules in HR-1 are trying to suppress the vote.

In his first speech on the Senate floor on Wednesday, newly elected Sen. Raphael Warnock (D-Ga.) spoke in defense of HR-1:

"We are witnessing right now a massive and unabashed assault on voting rights unlike anything we’ve ever seen since the Jim Crow era. This is Jim Crow in new clothes," he said.

"Since the January election, some 250 voter suppression bills have been introduced by state legislatures all across the country from Georgia to Arizona, from New Hampshire to Florida, using the big lie of voter fraud as a pretext for voter suppression."

Warnock said politicians "driven by that big lie aim to severely limit, and in some cases eliminate, automatic and same-day voter registration, mail-in and absentee voting and early voting and weekend voting. They want to make it easier to purge voters from the voting rolls altogether."

Warnock also said "they" want to make it a crime to give voters water and a snack as they wait in long lines to vote.

On the other hand, HR-1 "is a major step in the march toward our democratic ideals," Warnock argued, "making it easier, not harder, for eligible Americans to vote by instituting commonsense, pro-democracy reforms, like establishing national automatic voter registration for every eligible citizen and allowing all Americans to register to vote online and  on election day; requiring states to offer at least two weeks of early voting, including weekends in federal elections; keep ‘souls to the polls’ programs (Sunday bus trips to the polls) alive; prohibiting states from restricting a person's ability to vote absentee or by mail; and preventing states from purging the voter rolls based solely on unreliable evidence like someone’s voting history, something we've seen in Georgia and other states in recent years.”