Sen. Ted Cruz: 'The Fundamental Question Is, Are We Going to Follow the Law?' 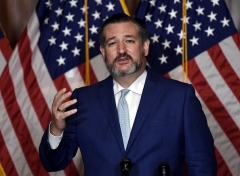 (CNSNews.com) - Partisan activists working for major media outlets insist that Donald Trump is plunging the nation into chaos by refusing to concede the presidential election to Joe Biden.

Far from conceding, President Trump is filing lawsuits, challenging the election outcome and sending his lawyers to investigate allegations of possible ballot miscounts, deliberate cheating, and fraud in key states where he watched his lead disappear.

Trump has every right to do that, but in the meantime, Biden and his media allies have claimed victory -- and they are outraged that many Republicans and Trump supporters won't fall in line behind Joe.

"The fundamental question is, are we going to follow the law?" Sen. Ted Cruz (R-Texas) asked in an appearance with Fox News's Sean Hannity Monday night.

You notice the news media on Election Day -- when you and I probably went to bed on Election Day seeing the same results, we saw that President Trump had won Florida, we won Ohio, we were leading in North Carolina, in Michigan, in Pennsylvania, in Wisconsin -- it looked like a very good night.

The way the system works is, you follow the law -- there are multiple lawsuits pending in multiple states -- those lawsuits have to be resolved, and they're serious allegations of violations of law. The right standard is that every single legal vote that was cast should be counted, but any votes that were illegally cast shouldn't be counted, and there's a way we resolve this.

You know, one of the frustrating things as a citizen, you see all these tweets going back and forth, you see allegations of this happened, that happened. It's hard to know, it's hard for anyone to know, all right, is this true, what's true?

And when the process is over, we're going to know the result, but we need to let the process play out and much of the mainstream media doesn't want to let us do that.

It is a fact that Democrat jurisdictions such as Philadelphia and Detroit prevented election observers from monitoring the ballot processing, either by keeping them too far away to see the ballots or by covering the windows.

"That's illegal," Hannity told Sen. Cruz. Hannity noted that elections are supposed to be "an open process that may be observed by any interested party."

"The important thing to understand is, these aren't just procedural niceties," Cruz agreed.

"The reason you have observers is to prevent fraud, to prevent ballot theft, and when you throw out one party or the other, it raises an inference that bad conduct is ongoing. Now, the fact that you or I might say that or someone might tweet that -- that's not conclusive evidence. That needs to be determined in a court of law.

"It's amazing that reporters are running around screaming, no, no, no, we can't resolve any of these legal matters."

Cruz said it's "just ridiculous" for anyone to claim that Trump and his supporters are "somehow undermining our democracy" by determining whether the law was followed.

"Recount litigation is very specific, it is county by county, and it is vote by vote, and it is demonstrating the facts. That's what we need, and we need to follow the law, follow that Constitution here."

CNN's Jake Tapper: Republican Leaders 'Are Acting Like Babies'
Sen. Roy Blunt to Stephanopoulos: 'The Media Doesn't Get to Decide Who the Winner Is'