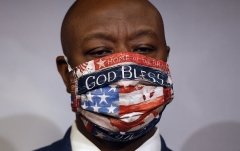 His words were met with racism, as Twitter erupted with insults for "Uncle Tim."

"Intolerance so often comes from the left with words like 'Uncle Tim' and the n-word being used against me by the left, and last night what was trending on social media was 'Uncle Tim,' and they doubled down on this concept of liberal oppression," Scott told "Fox & Friends."

"And I'll just tell you, it has been an amazing morning with so many good people calling, but the left is -- they have doubled down that they are not going to not attack my policies but they are literally attacking the color of my skin. You cannot step out of your lane, according to the liberal elite left."

Scott called it "upsetting" and "disappointing" that "people who want to be respected and given the opportunity to live their lives anyway they want to -- they don't want the same thing for you and me. What they want for us is for us to stay in a little small corner and not go against the tide that they think is America.

Their America and my America aren't the same America if, in fact, they think that discriminating is the fastest way to end discrimination. We have learned lessons from our past and we should. Racism and discrimination is still real, but it is being pushed further and further into a smaller corner in our nation. That's great news, and we should celebrate the progress being made by black folks and white folks working together, by Hispanics and Asians coming together.

If you want to be any American, the door's wide open -- the front door, by the way -- to come in and to add value to who we are, not be a part of destructive conversations that belittle individuals...The internal struggle we see in our nation, oftentimes led by the left, is a problem, a problem we can solve together. The American family is bigger than that. We should act like it.