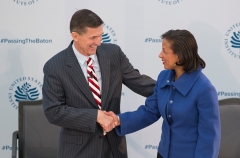 (CNSNews.com) - Sen. Mike Lee (R-Utah) says Congress must investigate the "simply stunning" revelation that the Obama administration apparently interfered with the transition of power to the legitimately elected Trump administration:

Lee spoke to Fox News's Martha MacCallum just hours after the release of a document naming 16 Obama administration officials who requested the unmasking of an American citizen, who turned out to be incoming National Security Advisor Michael Flynn.

This happened in the waning days of Obama's second term. The list of names begins with Samantha Powers in late November 2016 and ends with Joe Biden on January 12, 2017.

"I wasn't shocked by the people who were on it," Lee said.

"I was, however, a little troubled by the idea after -- what's it been, 230 years in which we've had peaceful transitions of power between one administration and another -- you've got what appears potentially to have been an effort by one administration to interfere with the next legitimately elected administration's ability to conduct foreign policy by threatening or at least investigating with an attempt perhaps to threaten -- a violation of the Logan Act of all things. This is simply stunning."

There is nothing illegal about unmasking names. But leaking those names, which is what happened to Flynn, is illegal.

In fact, on January 12, 2017 -- the same day Joe Biden requested the unmasking of Flynn's name -- Washington Post columnist David Ignatius reported that Flynn had called Russian ambassador to the U.S. Sergey Kislyak “several times on Dec. 29, the day the Obama administration announced the expulsion of 35 Russian officials as well as other measures in retaliation for the hacking.” Ignatius mused on whether Flynn had violated the “spirit” of the Logan Act.

No one in the Obama administration raised those concerns about Flynn with Donald Trump, although FBI Director James Comey did brief Trump on the salacious, unverified Steele dossier.

The fact that Trump was not briefed about concerns regarding Flynn troubled Sen. Lee:

"This is part of what is so disappointing about all of it. You add to that the fact that Joe Biden, when asked about it, said he didn't know anything about it."

Lee expects Congress to investigate what happened to Michael Flynn, who is now seeking to have the charges against him dismissed:

"What I do know, Martha, is that this is going to bring about a very significant investigation, and there are going to have to be a lot of people answering a lot of questions and there need to be an abundance of congressional hearings on this issue. This is really troubling stuff.

"The fact that you've got an outgoing administration threatening or perhaps contemplating criminal prosecution against the incoming administration's national security advisors is really disturbing."

"And these have real consequences in the real world for real people, and I think they should be ashamed of themselves. We all owe a great debt of gratitude to Michael Flynn for his willingness to serve and for what he's endured as a result of it."