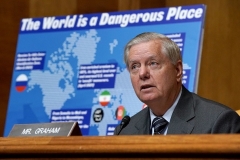 (CNSNews.com) - "Another 9/11 is far more likely today than it was a week ago," Sen. Lindsey Graham (R-S.C.), a member of the Armed Services Committee, told Fox News on Monday.

Graham noted that it was President Joe Biden who chose to close Bagram Air Base last month, removing all U.S. forces from Afghanistan, "not Donald Trump" (although Trump set the process in motion).

And now the threat to the homeland is through the roof. Tens of thousands of people who helped us are going to be left behind to be abused, and we're weaker throughout the world, a trifecta of catastrophe for the United States.

The person to blame here is the commander in chief who rejected sound military advice. Joe Biden has been incompetent most of his political life when it comes to foreign policy. As commander in chief, he is now dangerous.

Our country is more at threat today than we were last week because President Biden turned down sound military advice. And the same people in charge of Afghanistan are in charge of our border. When will we realize that they don't know what they're doing?

'The worst is yet to come'

Graham told Fox News that for three years, the United States "had a formula that worked -- a small American contingent of soldiers and airmen providing close air support to the...Afghan security forces, and medical evacuation capability. That gave the edge to the Afghan security forces," Graham said.

"So what happened is, we changed the game. Joe Biden is responsible for this, not Donald Trump. Donald Trump had a conditions-based withdrawal. The military told President Biden, if you pull the plug on Afghanistan, it's just matter of time that the Taliban takeover in whole or part. Nobody thought it would be 10 days.

"But, for three years, we had a formula where we would have a small footprint of Americans helping the Afghan Security Forces. We changed the game. The country collapsed."

Graham said the word "Taliban" should remind everyone of al Qaeda and 9/11:

"The president, Biden, doesn't understand this war," he said:

Radical Islam is a threat to humanity. They will attack us if we don't fight back and contain them over there. You got several choices here, fight them in their backyard or our backyard. The fight is coming back to our backyard because we abandoned Afghanistan.

You do it with partners or by yourself. We have abandoned the Afghan people. We have lost a good partner. The bottom line here is that President Biden doesn't understand, in my view, the threats to the United States from leaving Afghanistan. Another 9/11 is far more likely today than it was a week ago.

And I want to stress this. When you look to blame people, our military told President Biden, if we remove all of our forces, the Taliban will take the country back over and the threat to the homeland will get much greater in a very short period of time.

And the one thing that breaks my heart, as much as anything else, is that we're leaving tens of thousands of people behind to be abused and murdered by the Taliban who took a risk to help the United States. We're weaker all over the world because of this.

All I can tell you is that the men and women who fought for decades in Afghanistan honorably served our country. And now all has been lost because Joe Biden made a very bad decision, against sound military advice. And when it comes to Afghanistan, the worst is yet to come.

Graham said unless the United States establishes "safe corridors" enforced by the U.S. military, "tens of thousands people are going to be slaughtered" in Afghanistan.

"I don't care if you have to send the 82nd Airborne to do this," Graham said. "It is a point of honor to America. And I would say this. If you ask our military, anybody willing to go back to Afghanistan to help get those out that fought with us, you would have a million hands raised."

Graham also said the U.S. must warn the rest of the world not to legitimize the Taliban:

I want President Biden to tell Pakistan and China that, if you recognize the Taliban, you're recognizing a terrorist organization with blood on their hands regarding Americans, and we will hold you accountable.

This is a time for presidential leadership. But the problem with President Biden is, he doesn't understand the nature of the war. He's like a deer in the headlights and he is unable to adjust. The worst thing at a time of crisis is to have a commander in chief who can't change their mind.

As much as criticism you want to levy against President Trump, he made a decision in Syria to withdraw, and he changed his mind when he saw what was going to happen. He had a conditions-based withdrawal in Afghanistan. And I am convinced that President Trump would not have let this happen.

And our military told President Biden, if you do what you're talking about doing, you're going to have chaos on your hands. And they were right. And President Biden was wrong. Safe corridors need to be established right now to avoid thousands of people from being slaughtered who helped us.

And if we don't help these people now, who will help us in the future?

Graham addressed Biden directly: "Mr. President, you have a chance in the next 48 hours to establish safe corridors to get thousands of people out of Afghanistan who will be killed if you don't. Exercise some leadership here."