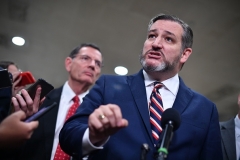 Sen. Ted Cruz (R-Texas) is out with a new book that explains the high stakes of a Supreme Court that currently splits 5-4 -- one vote away from eroding our constitutional liberties. (Photo by MANDEL NGAN/AFP via Getty Images)

And you look at a case like Heller versus District of Columbia, which I represented Texas and 30 other states litigating. Heller upheld the individual right to keep and bear arms. The four dissenters, they didn’t argue that some gun control is sometimes okay. Reasonable people can disagree on that. The four dissenters argued there is no individual right at all in the Second Amendment -- that the government could make it illegal for you or me to own a single firearm, and no American would have a right to challenge that in court.

That is radical, that is extreme, and Hillary Clinton and Joe Biden pledged every justice they appoint would vote for that position.

That’s how dramatic this threat is, and it’s why the stakes -- this nomination of Judge Barrett may well be the single most important thing President Trump has done in his first term. And it's a big reason why we need to re-elect him in November.

Sen. Cruz said he expects the confirmation hearing for Judge Amy Coney Barrett "to be a political circus."

The left, they do scorched-earth warfare against Supreme Court nominees. You rightly started with Bork You look at what they did to Robert Bork where Joe Biden played an integral part in it and Ted Kennedy, and they went after and smeared and defamed him. So much so that his name is now a verb. To Bork someone.

And then the people who have been Borked are obviously Robert Bork; Clarence Thomas, it was despicable what they did to Justice Thomas. Sam Alito, they went after him and smeared him. Justice Kavanaugh. And now – now they're starting with Judge Barrett. And it is -- I fully expect the confirmation hearing to be a political circus.

I expect -- the Democratic base demands that they do everything they can. I think we'll see a Cory Booker Spartacus moment. And we’re already seeing them target Judge Barrett's young kids, which is really despicable. Kids should be off-limits. On the merits, she is a very strong choice. And Sean, I'm confident the Senate is going to confirm her and do so by the end of the month.

The senator's new book, "One Vote Away," explains how easily our constitutional liberties could vanish in a 5-4 court that leans left.