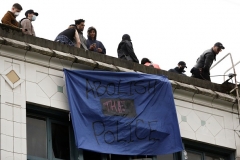 A banner reading "abolish the police" hangs from a building in the Capitol Hill Autonomous Zone (CHAZ) in Seattle on June 11, 2020. (Photo by JASON REDMOND/AFP via Getty Images)

(CNSNews.com) - Kshama Sawant, a member of the Seattle City Council, says the "rebellion" that has taken over part of downtown Seattle "is incredibly inspiring to the vast majority of American people."

She blasted President Donald Trump for threatening cities and people "who are courageously protesting against police violence, threatening them with further escalation and military targets. I think it is a -- we have to absolutely reject this idea.

"And, in fact, in that spirit on Monday, I will be bringing in legislation to vote to ban the use of all chemical weapons and crowd-control, so-called crowd-control weapons against protest movements and to ban chokeholds," Sawant said.

"It's extremely important that we take this historic moment to win a real victory against police violence, defund by at least 50 percent and fight for an independently elected oversight board over the police."

Sawant, a Socialist, represents the "autonomous" area where the East Seattle Police Precinct used to operate before city leaders ordered police to evacuate their building, which allowed protesters to barricade themselves inside a six-block area last Monday.

"The autonomous zone, as it's been called by the protest movement, is an incredible area of peace and friendship and dignity and to take the movement forward,” Sawant told CNN’s Brianna Keilar on Friday:

So it is full of hundreds of ordinary people, young people, children, families, and this is a movement obviously led by black and brown community members but it is welcoming to people from all over the city and the region who want to join in the struggle against police violence.

We have to move forward building our movement further. But the autonomous zone provides an inspiring and just a positive example of how we can have a vision for a society that is, you know, equal, and that provides a peaceful avenue for everybody to have a political and frank discussion without the presence of the police.

And I have to say, what we have now in the autonomous zone, which is a completely peaceful and friendly environment is a stark contrast for what it was for eight days. Just very recently with every night, Seattle police inflicting incredible brutality and violence, horrific against the peaceful protest movement led by black and brown people.

I was myself there on Sunday night alongside hundreds of others. I was tear gassed and maced. And you can see this incredible violence and the whole community of Seattle and the region and the country actually coming together and rejecting this violence, rejecting a status quo of murders by the police of black and brown people and demanding a change.

And I have to say Donald Trump is a coward. We have to fight against the reactionary agenda. At the same time we have to hold the establishments in various cities accountable.

This violence against the peaceful protest movement on Capitol Hill was carried out by Mayor Jenny Durkan. And that's why it's no surprise that tens of thousands of people in Seattle are calling for her resignation because they reject police violence, they reject police brutality and we want a society that is based on equality and cooperation.

Sawant said peace is not achieved through "bloated" police budgets and "by having police armed to the teeth."

"It's actually the exact opposite. It's when you have a society that is free of that kind of oppressive and repressive policing that it's possible" (to have peace).

This rebellion happened in the first place because police departments in city after city after city have been murdering black and brown people, exacting systematic violence against people with impunity. This has happened with impunity. Not a single police officer so far has been prosecuted under Mayor Durkan, for example, in Seattle.

Eight black and brown community members have been murdered at the hands of the police. Not one police officer has been prosecuted. We need to change the status quo.

That is why our movement is demanding that we defund the police by at least 50 percent and divert those funds for community programs, for restorative justice so we begin to address this systematic racism, what we need beyond that.

Sawant is advocating an independently elected community oversight board with “full powers over the police.”