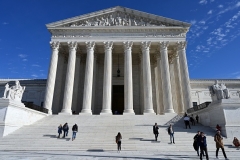 (CNSNews.com) - In a ruling issued Tuesday, the six Republican appointees on the U.S. Supreme Court held that the State of Maine may not limit its tuition assistance program to "nonsectarian" schools.

"Maine has enacted a program of tuition assistance for parents who live in school districts that do not operate a secondary school of their own," Chief Justice John Roberts wrote for the majority:

"Under the program, parents designate the secondary school they would like their child to attend -- public or private -- and the school district transmits payments to that school to help defray the costs of tuition. Most private schools are eligible to receive the payments, so long as they are 'nonsectarian.'

"The question presented is whether this restriction violates the Free Exercise Clause of the First Amendment."

As the opinion noted, Maine has limited its tuition assistance payment to "nonsectarian schools" since 1981.

The petitioners wanted to send their children to accredited religious schools, but since those two schools did not qualify as "nonsectarian," they were denied the state tuition assistance payments.

The petitioners sued the commissioner of the Maine Department of Education, alleging that the “nonsectarian” requirement violated the Free Exercise Clause and the Establishment Clause of the First Amendment, as well as the Equal Protection Clause of the Fourteenth Amendment.

A district court ruled against the petitioners; and the First Circuit Court of Appeals upheld the lower-court ruling.

But the U.S. Supreme Court held that "Maine's program cannot survive strict scrutiny. A neutral benefit program in which public funds flow to religious organizations through the independent choices of private benefit recipients does not offend the Establishment Clause."

The Constitution's 1st Amendment says in part: "Congress shall make no law respecting an establishment of religion, or prohibiting the free exercise thereof..."

In  a dissenting opinion, Justice Stephen Breyer wrote that the two clauses noted above -- the "establishment" and "free exercise"  clauses -- create "legislative leeway" that may allow a state to withhold aid from religious institutions without violating the Constitution’s protections for the free exercise of religion.

"In my view, Maine’s nonsectarian requirement falls squarely within the scope of that constitutional leeway," he wrote.

"Maine wishes to provide children within the State with a secular, public education. This wish embodies, in significant part, the constitutional need to avoid spending public money to support what is essentially the teaching and practice of religion.

"That need is reinforced by the fact that we are today a Nation of more than 330 million people who ascribe to over 100 different religions. In that context, state neutrality with respect to religion is particularly important.

"The Religion Clauses give Maine the right to honor that neutrality by choosing not to fund religious schools as part of its public school tuition program. I believe the majority is wrong to hold the contrary."

"From a practical perspective, today’s decision directs the State of Maine (and, by extension, its taxpaying citizens) to subsidize institutions that undisputedly engage in religious instruction...In addition, while purporting to protect against discrimination of one kind, the Court requires Maine to fund what many of its citizens believe to be discrimination of other kinds."

Her dissent mentions the policies of the two religious schools in question that deny enrollment to students "based on gender identity, sexual orientation, and religion."