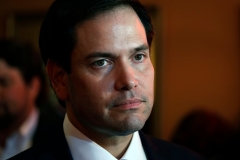 (CNSNews.com) - Sen. Marco Rubio (R-Fla.) is among the Republicans who say the second impeachment of Donald Trump is not only unconstitutional, it's "vindictive" and sets a dangerous precedent.

He said it's also a ratings booster for the partisan media -- and a potential money-raiser for Democrats who will get "free national air time" during the trial.

"This is not the right use of Congress's time," Rubio told Fox News's Neil Cavuto.

"It's vindictive. This is all about the left's demand for revenge. And I'm going to be frank. Some of the people out there in the political entertainment business, this is about ratings and about clicks, because this is another drama story that adds to the show.

"And I just think it's a terrible thing for the country. And -- but they're going to put us through it, because this is exactly what their base is demanding."

Rubio noted that the consequence of an impeachment conviction is removal from office.

How can you put someone through a process where the automatic consequence of it is impossible? You can't remove Donald Trump from office. He's not in office.

The second is, we have got all these important issues in this country. We have heard all these months and years about how the virus needs to be dealt with. And I agree. The economy has been hurt by it. I agree. National security threats, nominations, all these things we should be working on.

And, instead, we're going to spend from 1:00 until 7:00 or 8:00 six nights a week for as long as it takes on an impeachment trial. And they're going to tell you we can walk and chew gum.

The third is, it stokes the fire. This is a country that's already deeply divided. Politics has become very emotional. People literally hate each other in this country over politics. And now, on top of that fire, we're going to pour all of this gasoline, and really get it going hotter.

And the last point I would make is, it is pretty typical in the Third World that, after someone's out of office, they lose, they leave, the party that takes power then prosecutes them. It happens all over the world.

And that's the precedent we're creating here now, that we're creating the precedent where we are going to have future political majorities in Congress pursuing, pursuing the previous president, maybe even threatening that president while they're in office that they're going to impeach him after they leave if they don't do this or they don't do that.

So, there's a lot of reasons why this is stupid and a terrible idea for the country. This actually isn't just a waste of time. It's going to hurt America.

Rubio said if the president did something that warrants a trial, then "the criminal justice and the civil system" is the place to pursue it once he's out of office.

“I think that there's no doubt that the president bears some responsibility for what happened. I think what happened was a foreseeable consequence, not just of what he said, but all the events leading up to it.

"In this case, he is now a private citizen. And if he committed wrongdoing while he was president, then the criminal justice system can deal with that,," Rubio said.

Democrats in Congress and in the media who have spent four years attacking Donald Trump want the Senate to convict him and bar him from running for office ever again.

"He's a private citizen. He has every right to run again," Rubio said:

And this idea that we need to do this so we can disqualify him, it's arrogance. Who are we here in the Senate or in the -- those guys over in the House, who are we to tell the American people, here's who you can vote for and here's who you can't?

Let me tell you, if Donald Trump did as terrible a job as the Democrats think he did, if history is going to reflect so poorly on him, as they believe and they say it is, then what are they worried about? Then why -- then why do they have to do that?

Because the only way Donald Trump can ever be president again is if people vote him into office, if they elect him, the people. And so I just don't -- again, it's a tremendous arrogance on their part to decide, we're going to disqualify you from office.

This is a vengeance play. That's all this is. This is all about vengeance and retribution, because that's what the radical left is demanding of their party leaders.

And I would imagine it's also an opportunity for some House members to get some free national airtime doing this impeachment trial and help them raise some money off that as well.