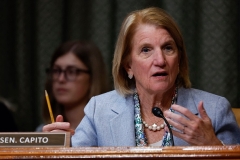 Senator Shelley Moore Capito (R-W.Va.) represents a pro-gun state where lawful gun owners, including the many hunters, may carry a firearm openly or concealed. (Photo by TING SHEN/POOL/AFP via Getty Images)

(CNSNews.com) - Sen. Shelley Moore Capito of West Virginia is among the 15 Republicans joining all 50 Senate Democrats to pass a bipartisan gun-related bill that some of her fellow Republicans view as a rushed and flawed prescription that won't fix the problem.

Capito issued a statement explaining her position on the bill that is expected to reach President Joe Biden's desk today.

While some of her fellow Republicans oppose the bill's funding for states to establish "red flag" laws as unconstitutional, Moore said, "West Virginia is not and will never be a red flag state." But many states other than hers will establish such laws.

As the House Freedom Caucus describes it:

“Red flag laws permit the pre-emptive seizure of firearms from Americans without due process by allowing any person to report a gun owner to law enforcement and petition for the confiscation of that individual’s firearms, even before the gun owner has an opportunity to defend themselves."

“The American people want us to do something to prevent gun violence in our nation. I strongly agree, but in doing so, it was important that our effort was focused, impactful, and did not infringe upon our sacred 2nd amendment rights. This legislation meets that criteria.

“West Virginia state lawmakers also passed a law—which I strongly support—that would effectively prevent state and local police from enforcing any federal gun law that exceeds those existing in the state. This bill respects that decision. In other words: West Virginia is not and will never be a red flag law state.

“The challenge of combating gun violence is broad, and this bill includes resources for mental health and school safety. It also recognizes the value of the NICS System, which is managed primarily in Clarksburg, West Virginia. The men and women at the FBI Center there do a stellar job processing record amounts of background checks, and I will always support their important work.

“This legislation presented an opportunity to say, ‘enough is enough’ to the violence that has devastated far too many of our communities and violence that I never want to see in West Virginia or anywhere else in our great country.”

As a result of red flag laws, the House Freedom Caucus wrote, “experts have found that one-third of confiscation orders were wrongly issued against innocent Americans, and it often takes a tremendous effort to overturn.

"These laws are ripe for abuse as they give government the power to decide who is deemed mentally fit to own a firearm based on the say-so of any accuser, and that should concern every American, as some Democrats have already signaled their intention to use red flag laws to target gun owners based on their political beliefs.”