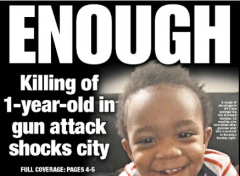 (CNSNews.com) - Moves to defund and discredit police departments have produced an alarming spike in crime in large, Democrat-run cities, including in New York City, where a one-year-old boy was shot and killed at a family picnic in a Brooklyn park Sunday night.

President Trump declared New York City "out of control" on Monday. Likewise, Rep. Peter King (R-N.Y.) warned on Monday night, "We've got to turn this around or the country's going to be lost."

I think there's so much hypocrisy here, Martha, whether it's the Black Lives Matter movement, whether it’s the progressive politicians like Mayor de Blasio, Governor Cuomo, and Congresswoman Ocasio-Cortez, the fact is that they are more interested, I think, in pushing a political agenda.

And listen, everyone agreed, totally agreed, that the murder of George Floyd was horrendous. So since then, we've had riots and demonstrations -- we had demonstrations in New York against the NYPD, which did not have one questionable shooting last year at all. Thirty-six thousand cops, 35 shots were fired the whole year. Only 35 copes even fired their weapons last year. There were five African-Americans killed and four of those five had guns or knives.

So, far more whites shot than blacks in New York. So all these demonstrations out on the streets denouncing the cops, cursing at the cops and throwing bricks at them, Molotov cocktails, that again was allowed to happen, encouraged, and that encourages the violence. As a result, the cops are necessarily pulling back, with restrictions put on them as to what they can do.

They can't get somebody in a headlock, and as the result of that, the thousands of lives that have been saved in the minority communities are now being lost. I mean, I guess maybe 350 shootings since Memorial Day in New York and over 75 murders. Ninety-eight percent of the shootings were committed against minorities and 100 percent of the murder victims were African-American. And they were done in their own communities.

And that's what the cops have been able to prevent over the last 25 years. But because of these progressive policies and painting "Black Lives Matter, which is a radical -- far as I'm concerned, semi-terrorist organization -- they're focusing on that and ignoring the fact that innocent black kids -- last night, a 1-year-old kid was shot down in the streets of Brooklyn at a family outing.

MacCallum noted that Mayor Bill De Blasio blamed "so many guns out there" for the "heartbreaking" shooting death of one-year-old Davell Gardner Jr., who was shot in the stomach while strapped in his stroller.

Rep. King agreed that there are more guns on the street as police officers pull back:

"The cops took more guns off the streets over the last several years...but now that unit, which was going after guns, has been disbanded because it was considered too offensive. So, yeah, there are guns on the street, and they're being used by the bad guys, and I wish, you know, Mayor de Blasio realized that when he went after the cops."

King said every New Yorker, especially people in minority communities, "should thank the NYPD for the job they've done." He said politicians and media people "have blood on their hands" for stoking resentment of police, then failing to report the consequences:

"For instance, in New York today, the media stories, the local news, the shooting of that boy was like fourth or fifth down. The main story was that somebody threw red paint on the Black Lives Matter sign in the middle of the street.

"That shows how our priorities are out of whack, and we've got to turn this around or the country's going to be lost," King warned.