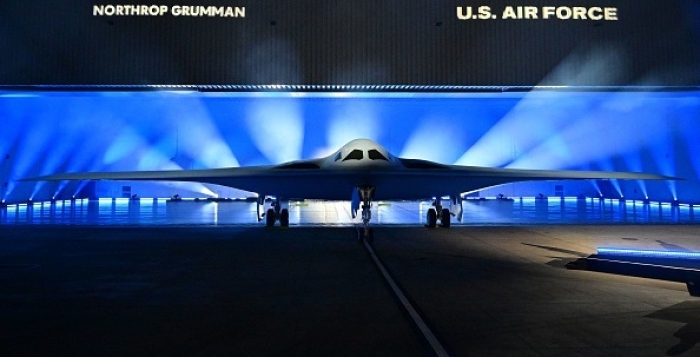 The B-21 Raider is unveiled during a ceremony at Northrop Grumman's Air Force Plant 42 in Palmdale, California, December 2, 2022. (Photo by FREDERIC J. BROWN/AFP via Getty Images)

(CNSNews.com) - Rep. Mike Turner (R-Ohio), the incoming chair of the House intelligence committee, says he's "extremely" concerned about China ramping up its nuclear arsenal. He also credited the Biden administration with being "very forward-learning" in explaining what China is doing.

Turner appeared on CBS's "Face the Nation," where host Margaret Brennan showed viewers the new B-21 Raider, the first nuclear stealth bomber aircraft added to the U.S. arsenal in many years.

"And it's being packaged as this deterrent to China," Brennan told Turner. "How concerned are you about the pace of Beijing's nuclear development?" she asked the congressman:

"And I want to commend the administration, because they've been very forward-leaning in releasing and declassifying information about what China is doing. They are expanding their nuclear weapons, their nuclear weapons capabilities, their ICBMs that are targeting the United States.

"This plane is incredibly important. I served as chair of the Air and Land Subcommittee, as we, on a classified basis, began the process of working on this plane. And it gives us an additional balance, because it's an additional delivery vehicle, additional way to combat what China's doing."

"To cause people not to drop nuclear weapons," Turner said:

"It is to make certain that the balance of power is there, so that people understand that the -- that the cost is just too great. When China is expanding the nuclear weapons, they're looking at the United States. If we blink, if we don't -- if we don't respond, then they assume that they can get first strike capabilities that not only holds us at bay, but really holds us at risk, because then you have the leader of a nuclear power that might make that miscalculation, and, of course, cost unfathomable lives.”

According to the recently released 2022 National Defense Strategy, the Pentagon says: "The most comprehensive and serious challenge to U.S. national security is [China's] coercive and increasingly aggressive endeavor to refashion the Indo-Pacific region and the international system to suit its interests and authoritarian preferences...In addition to expanding its conventional forces, the [Chinese military] is rapidly advancing and integrating its space, counterspace, cyber, electronic, and informational warfare capabilities...In parallel, the PRC is accelerating the modernization and expansion of its nuclear capabilities..."

Defense Secretary Lloyd Austin unveiled the B-21 on Friday, at a Northrop Grumman plant in Palmdale, California.

"The B-21 Raider is the first strategic bomber in more than three decades," Austin said at the rollout.

Austin also described what the B-21 can do:

"Let's talk about the B-21's range. No other long-range bomber can match its efficiency. It won't need to be based in-theater. It won't need logistical support to hold any target at risk.

"Let's talk about the B-21's stealth. Fifty years of advances in low-observable technology have gone into this aircraft. And even the most sophisticated air-defense systems will struggle to detect a B-21 in the sky.

"Let's talk about the B-21's durability. You know, we really don't have a capability unless we can maintain it. And the B-21 is carefully designed to be the most maintainable bomber ever built.

"And let's talk about what the B-21 can deliver. The Raider is designed to deliver both conventional and nuclear munitions, with formidable precision. So like generations of bombers before it, the B-21 will be able to support joint and coalition forces across the full spectrum of operations.

"And the Raider was built with an open-system architecture, which makes it highly adaptable. So as the United States continues to innovate, this bomber will be able to defend our country with new weapons that haven't even been invented yet.

"And the B-21 is multi-functional. It can handle anything from gathering intel to battle management to integrating with our allies and partners. And it will work seamlessly across domains, and theaters, and across the joint force.

"And so that makes it vital to our mission to defend America and deter aggression...."