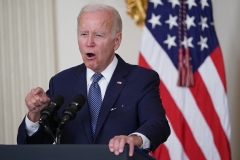 "You know, I think this is the leftist agenda, right. They rename everything. Everything has a new definition -- we're not in a recession, you know, you're not a woman, everything is a different thing.

"Their idea and definition of ‘secure’ is not what you and I believe it is, so they're trying to redefine what secure means. So we got to get back to basic common sense in this country, and it starts with border security, and from there things will get better, I promise."

Cammack, who has made several trips to the overrun U.S.-Mexico border, said she has invited Border Patrol agents to visit her district in Florida this Saturday, "to share their stories, their experiences, because we are feeling the effects here in Florida, as is every other town in America,” she said.

"Last night I spoke to a mom who lost her 28-year-old daughter to one pill. She thought she was taking Xanax. In fact, it was fentanyl and meth that that came from the border. They are finding bricks of fentanyl that have stamps of border cartels on them.

“It is impacting every person in America today, every family is being impacted by this."

“They need a policy that says that they're going to be allowed to do their jobs, and God bless Texas for stepping up and trying to fill that void where the federal government has fallen down."

Just as Democrats are redefining what "secure" means, they're doing the same thing with the "Inflation Reduction Act," Cammack said:

“As you said, it’s a marketing ploy, and we knew that from the beginning. It's ‘build back broke’ all over again, just in new packaging. It's the same green new deal provisions that are actually going to make gas more expensive, fertilizer more expensive, energy, heating bills more expensive.

“And in fact, I was talking with somebody yesterday and they said, you know, I was waiting to make some renovations on my home, but, one, I can't afford it anymore. Two, you can't get any of these products anymore.

“And then we found out that there's little tax credits in there like 30-percent tax credits if you're able to replace the windows in your home. I have a window manufacturer in my district. They're 18 months behind, and you can't afford it anyways.

“It's a sellout to China, and we're selling out the American people in the process, and it's ridiculous they're now traveling 23 states on the taxpayer dime, they should be ashamed.”