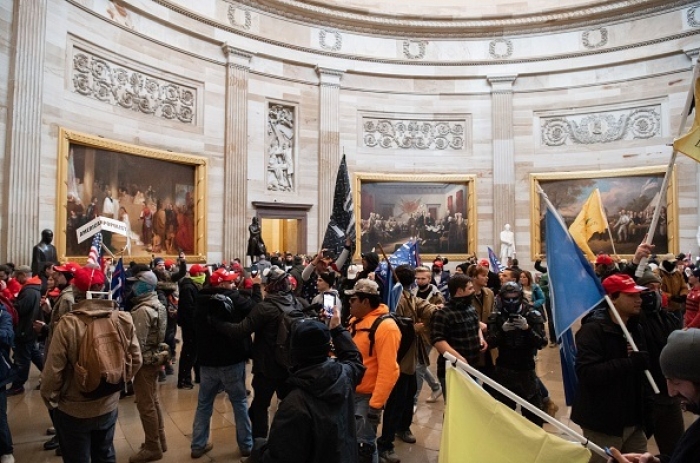 Trump supporters mill around in the U.S. Capitol Rotunda, following those who broke into the not-so-secure building on January 6, 2021. (Photo by SAUL LOEB/AFP via Getty Images)

(CNSNews.com) - The House committee investigating the events of January 6th -- strategically leaking along the way -- has scheduled its first public hearing in prime time tomorrow night.

Most media outlets will cover the info-tainment event live, but not Fox News.

"This is the only committee hearing I've ever seen in Congress where there was not an opportunity to cross-examine witnesses because there is no Republican on that committee who will do it," Jordan told "The Ingraham Angle."

The only two Republicans on the committee are Reps. Liz Cheney and Adam Kinzinger, both of them anti-Trumpers who fully agree with Democrats that the attack on the U.S. Capitol by an unruly mob amounted to "insurrection" and a threat to democracy.

The only person shot and killed on that day was an unarmed protester coming through a window.

The U.S. Attorney’s Office for the District of Columbia and the Civil Rights Division of the Justice Department announced in April they would not pursue criminal charges against the U.S. Capitol Police officer who killed 35-year-old Ashli Babbitt. The reason -- "insufficient evidence to support a criminal prosecution."

Jordan said Thursday's hearing is even worse than the secret impeachment hearings conducted by Democrat Adam Schiff in 2019:

"At least I got to be in that room and depose witnesses, and then when they had hearings, we got to cross-examine witnesses. But in this situation that's not even happening, so this is a completely choreographed presentation, completely partisan. The good news is the American people have figured all that out."

According to ABC News:

"One of the witnesses planned for Thursday's hearing is documentary filmmaker Nick Quested, who was embedded with the extremist far-right group the Proud Boys during the assault on the Capitol, ABC News Chief Washington Correspondent Jonathan Karl reported.

"The hearing will be the first time Quested shares his story publicly. Lawmakers are also expected to air material captured by Quested and his crew."

"She told ABC News last October that she was still struggling months after the incident," the network reported, quoting Edwards saying: "'You kind of have this, this guilt of like, am I -- am I making this up? -- because I can't tell, you know, I can't show in a tangible way that I'm injured, but you know I really have to tell people I'm not feeling good today,' Edwards said."