Rep. Jordan: 'Everything Costs More Because They Have the Dumbest Economic Plan in History' 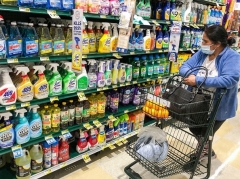 (CNSNews.com) - President Biden this week acknowledged that inflation and supply chain disruptions are a problem, and he said his administration is "trying to figure out how to tackle them head-on."

And while he's trying to figure it out, things will only get worse, Rep. Jim Jordan (R-Ohio) told Fox News's Laura Ingraham:

Their plan is basically, lock down the economy, spend like crazy, pay people not to work. And then what are they going to do in this next bill for the people who have been working, they're going to raise their taxes and spend even more money.

Stupid plan. And that's why we're in the situation we are. And why families are being shortchanged like they are under this administration. Let's hope that Joe Manchin and Senator Sinema hold tough so that it doesn't get even worse.

Sens. Joe Manchin and Kyrsten Sinema are the only two Democrats opposed to the cost and scope of Biden's $2-trillion "Build Back Better Act." Without their votes, Biden’s leftist agenda cannot pass.

On Wednesday, Biden's Chief of Staff Ron Klain said Biden's Build Back Better Act will ease inflation by reducing the cost of childcare, prescription drugs, elder care, and health care premiums. He insisted the $2-trillion-plus bill is fully paid for, and "It doesn't add any new money to the economy," he told CNN's "The Lead" with Jake Tapper.

"Yes, they're going to make the problem worse," Jordan said:

And there's a reason why Joe Biden's ratings are at -- approval rates are at 38 percent; Kamala Harris's are at 28 percent. Barely the two of them combined over 50 percent. This is how bad it is. And it's why we're going to win, I think, in a big way next November.

Jordan said not only will Biden's spending spree make inflation worse, he's going to have to raise taxes on people making less than $400,000 to pay for it, even though Biden has pledged not to do that.

"And, of course, we also knew when Joe Biden told us a week ago that he really wasn't going to pay people who illegally came into our country $450,000. We also knew that was true when he told us it wasn't.

"And I mean, the outrage from the people -- I've been all over our district today. The outrage from the citizens I get the privilege of representing is real, because they've had it with this administration, and with what Democrats have done in complete control of our government."