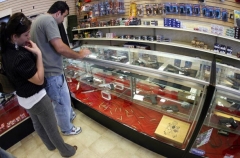 (CNSNews.com) - In a letter to Rep. Michael Cloud (R-Texas), the Bureau of Alcohol, Tobacco, Firearms and Explosives (ATF) said it has obtained 920,664,765 records of gun purchases that formerly were kept by gun dealers who have now gone out of business.

"In total, ATF manages 920,664,765 OBR [Out of Business Records] as of November 2021. This includes digital and an estimated number of hard copy records that are awaiting image conversion. It is currently estimated that 865,787,086 of those records are in digitalized format," the AFT told Rep. Cloud, as reported by the Washington Free Beacon.

According to the Washington Free Beacon: "When a licensed gun store goes out of business, its private records detailing gun transactions become ATF property and are stored at a federal site in West Virginia. The practice has contributed to the fears of gun advocacy groups and Second Amendment champions in Congress that the federal government is creating a national database of gun owners, which violates longstanding federal statutes."

You got the FBI going after parents, you got the DOJ setting up a domestic terrorism unit. Now we find out the ATF is going after law-abiding gun owners.

I mean, I -- think about this, Hillary Clinton destroyed 30,000 emails while she was under investigation, and now every single gun purchase by a law-abiding American is being preserved. So what? So that the federal government can set up a national database?

This is scary stuff, what they've done to our First Amendment rights, and now what they're doing to our Second Amendment liberties. All from one administration, all in a single year. So yes, there's a number of us who are very concerned about this. And this is why we wrote the letter.

And frankly, we didn't realize it was quite this number of purchases over the last 20-some years that the federal government is now compiling.

In its letter to Cloud, ATF said it developed its OBR system in 2006, "due to practical concerns related to maintaining paper and microfilm records." ATF said the "sole purpose of these systems is to trace firearms used in crimes," and "ATF is confident that it does not violate any laws."

Jordon, however, said the disclosure of ATF's digitized gun purchase records should be viewed in "context."

It was just a few years ago, the IRS went after conservatives. Then we find out the FBI spying on a presidential campaign, then we learn that there's all kinds of abuses in the FISA process, not just what you and I've talked about, and others have talked about. But the inspector general pointed it out with two separate reports, unbelievable abuses of the FISA process.

Then you see just three weeks ago...in one day, we had the President of United States give a speech in Georgia, where he called half the country terrorist and racist. That same day, we learned the FBI and the DOJ have set up a domestic terrorism unit.

And that's also the same day we learned that the Department of Education solicited the letter from the School Boards Association so they would have the pretext to do what they wanted to do, namely go spy on American parents, moms and dads showing up at school board meetings.

So that's the context. And now we learn, almost a billion purchases are in this database that is searchable and usable by the government that over the last two years, and you were the first to say this. I remember, in April of 2020, you said when they started this lockdown stuff with COVID, where's this going to go? And look what's happened in the last two years. So that is the context that we have to view all this.

And that's what scares us so much, and why we wrote the letter and why we're going to continue to scream and shout about what's going on in this administration.

Rep. Michael Cloud tweeted on Monday: "A federal firearm registry is explicitly banned by law. The Biden Administration continues to empower criminals while diminishing the rights of law-abiding Americans. The ATF is shamelessly circumventing existing law to accumulate these records. They must be held accountable."