Rep. Jordan: Biden Planning to Pay Millions of Taxpayer Dollars to Illegal Aliens? 'One of the Many Stupid Policies' 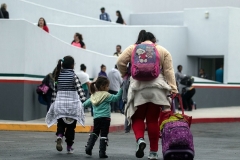 (CNSNews.com) - Here's the "exclusive" headline in today's Wall Street Journal: "U.S. in Talks to Pay Hundreds of Millions to Families Separated at Border."

The Biden administration is in talks to offer immigrant families that were separated during the Trump administration around $450,000 a person in compensation, according to people familiar with the matter, as several agencies work to resolve lawsuits filed on behalf of parents and children who say the government subjected them to lasting psychological trauma.

I mean, think about this, you are going to pay people half-a-million dollars who broke the law at the same time the Biden administration is getting ready to raise taxes on the hardworking families of this country. It makes absolutely no sense.

And you know, I think about this. First you break the law, you get amnesty with Democrats. Now they are going to pay you for breaking the law.

I mean, you think we have a problem with a caravan coming towards the border now, and what we have seen over the last several months -- wait until the word gets out that you actually get paid for breaking the law to come into our country. One of the many stupid policies from this administration.

Jordan noted that lawyers will get a big cut of the reported taxpayer settlement: "They always get a big take. And, again, so the American taxpayers, their taxes are getting ready go up. Let's hope it doesn't happen and they don't pass this crazy package.

"This is the situation, and oh, now we're going give you money to do it."

In April 2018, then-Attorney General Jeff Sessions announced a "zero-tolerance" policy to slow illegal immigration. As a result of congressional inaction, he said, "a crisis has erupted at our Southwest Border that necessitates an escalated effort to prosecute those who choose to illegally cross our border."

He warned that people illegally entering the United States "will not be rewarded but will instead be met with the full prosecutorial powers of the Department of Justice."

Under that policy, many parents were arrested and thus separated from their children, because children are not allowed in federal detention centers. Some of those families were never reunited.

According to the Homeland Security Department, a Biden-appointed Family Reunification Task reported in June that it had identified 3,913 children who were separated from their families at the U.S.-Mexico Border between July 1, 2017 and January 20, 2021, based on the “Zero-Tolerance” policy.

With help from non-governmental groups, at least 1,786 children were reunified with their parents in the United States, but at the time, there were 2,127 children for whom the Task Force did not have a confirmed record of reunification.