Rep. Jim Jordan: 'Why Is Joe Biden on Vacation?' 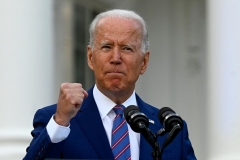 (CNSNews.com) - As Afghanistan falls to the Taliban, leaving Americans as well as desperate Afghanis crowding the airport in Kabul on Sunday, President Joe Biden remained secluded at Camp David. He's said nothing in public to a shocked nation.

"Well, I think the first thing is, why is Joe Biden on vacation?" Rep. Jim Jordan asked Sunday in an interview with Maria Bartiromo, host of "Sunday Morning Futures."

I don't think he's taken one question from the press this entire weekend. So, this is a frightening situation. It's an embarrassing situation for the United States. But I think, frankly, it's not surprising.

I mean, Maria, tell me what this administration has done right in their first eight months on the job? We got inflation like crazy. We got a crisis on the border, which we're going to talk about. We now have this unbelievable mess in foreign policy. We have an economy that's not where it needs to be and crime surging in every major urban area. We had 12 murders in Chicago two weekends ago. So tell me what they have done right.

This is -- as I said, it's embarrassing. It's frightening. It's -- we have never seen anything this -- this crazy in foreign policy probably since back in Vietnam, when we had to get people out at the last minute as well.

That just would not happen when you project strength and confidence from the White House. But, unfortunately, we don't have that today.

Jordan noted that because of the Biden administration's failure to secure the southern border, terrorists "could get into our country."

We know the drug cartels now have basically control, and they're sending people through the border. Of course, fentanyl, and drugs are coming through, causing all kinds of harm in our communities.

We now have what Secretary Clinton said five years ago. We have a borderless hemisphere. And I believe it's intentional, because you cannot look at these numbers and look at what's happening and not conclude that it's actually an deliberate act by the Biden administration.

This just keeps increasing. So, it is truly a deliberate action, a borderless hemisphere, as the Democrats said. And it brings with it all the problems of drugs, not to mention the threat from terrorists now again. When you have a weak administration, bad guys will exploit that.

"I mean, this is Joe Biden's America," Jordan said.

Terrorists being more aggressive. The Taliban control Afghanistan. The cartels control the border. And China keeps being as aggressive as they can. That is the world we live in today, again, because you don't have any kind of confidence, I think, projected from the Oval Office.

So, look, it's no accident or no question of what needs to happen. You got to go back to the policies that work. You got to build a wall. You got to have the remain-in-Mexico policy. And you need to -- imagine this, Maria -- enforce the law.

But the Biden administration refuses to do those simple things.