Rep. Jim Jordan: 'No President Has Done More of What They Said They Would Do' 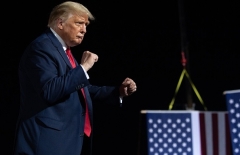 "What I also hope really comes up is the president stresses what he did for the American people."

No president -- no president has done more of what they said they would do than this guy. That should come out tonight loudly and clearly and the American people understand that.

And, of course, this Hunter Biden issue should come out because it goes to the credibility of Joe Biden -- to the heart of this campaign and the fact that you have tech giants, tech companies censoring this information is ridiculous, as we're just 12 days before this important election.

The New York Post on Thursday published a statement from one of Hunter Biden's former business partners asserting that the Biden family, including Joe, Hunter and Joe's brother James, "aggressively leveraged the Biden family name to make millions of dollars from foreign entities even though some were from communist controlled China."

Tony Bobulinski says he was one of the recipients of the May 13, 2017 email detailing an equity distribution, including this line; "10 held by H for the big guy?"

H is Hunter, and "the big guy" is Joe Biden, Bobulinski said. He also said the email is legitimate and not Russian disinformation.

Bobulinski said both the Senate Homeland Security Committee and the Senate Finance Committee have now asked him to turn over all documents relating to his business dealings with the Bidens. He said he has "extensive relevant records and communications' and will comply.

Is the laptop Hunter Biden's? Yes, we have a drop slip. We now have a guy who was a business partner who will testify to it.

Are the emails accurate? Yes, the guy who was the business partner just told you that this -- these emails are accurate and, of course, the 'big guy' reference is, in fact, to the former vice president Joe Biden.