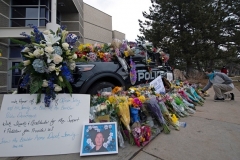 The police car belonging to Boulder Officer Eric Talley, one of ten people killed in a mass shooting at a King Sooper's grocery store, is covered in flowers on March 23, 2021. (Photo by JASON CONNOLLY/AFP via Getty Images)

He was talking about the supermarket massacre in Boulder, Colorado, where a young man described as mentally ill by a relative shot and killed ten people. It is the latest in a long list of appalling crimes by people misusing guns. And some of the most notorious mass shootings have happened in Colorado:

"Well, I think it's always Democrats use tragedies like this to advance their radical agenda, particularly as it relates to gun-control in this case," Hice said:

At the end of the day, look, all of these tragedies reveal that we have a spiritual problem in this country, and at some point we have got to release the faith communities across this country to address those spiritual issues of the heart rather than blame guns for these acts of violence.

As President Biden and various Democrats call for gun control legislation, including a ban on so-called assault weapons, Sen. Joe Manchin (D-W.Va.) on Tuesday said he does not support House-passed gun control legislation that would require background checks on every gun sale and extend the time for completing a background checks, among other things.

Manchin said "commercial transactions should be background checked" because "you don't know a person." "If I know a person, no," he said.

"Criminals don't abide by the law, and there is no point in taking away the rights of American citizens to protect themselves just for the sake of looking as though you're trying to deal with the problem, and he understands that."